While designing the system architecture for Playstation 4, Mark Cerny has been moonlighting as a game director on a family adventure called Knack. At E3 he told us more about the game and its development.

Cerny told us about his hopes for the game: "My goal is I want this [Knack] to be everybody's second purchase, if that makes sense. You got to the game stores, the core gamer, and you get Watch Dogs or Driveclub or Killzone and the like, and then you get Knack for the rest of the family, or even you get Knack for yourself."

"Because you put this game on hard and it really will bring back of those character action games, and just how fun and involving they were to play back in the day," he concluded.

Development on the title has taken its time, and during the interview Cerny explains how the various elements have come together. He also revealed that some features are still to be announced: "Things are looking pretty good right now. The game, you know we are always very busy before we launch these things, Knack is no exception. And we're putting in new features which we'll be introducing at future shows."

Knack is going to be a launch title for Playstation 4, and the console is set to be released at some point during November, although definite dates have yet to be confirmed. 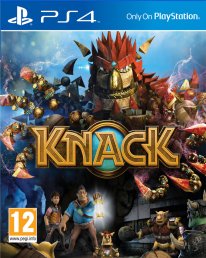