Mutant Football League for the Sega Mega Drive became a huge hit in the early '90s, and a couple of years ago an attempt was made to reboot the franchise for smartphones and Xbox 360. That didn't turn out well, but the developers haven't given up yet.

Now a new Kickstarter campaign has been launched for the game, which has had some success on Steam Greenlight. If everything goes as planned, a PC version will launch this year and then it will be released for PlayStation 4 and Xbox One next year. The developers are asking for $60,000 and have already reached half of that with 31 days to go.

As you might expect from the name, this is an extra brutal form of football where you can still win even with a lower score, as long as you kill of your opponents. This is what the developer promises:

Mutant Football League is an action football game where you pick from 14 Unique Teams or 3 All-Star Teams for online or offline gameplay, in solo, co-op, or head-to-head modes. Players can win by scoring more points than the opposition or by literally decimating the opposing team so they have to forfeit. The choice is yours! This is the next generation, spiritual successor to the classic retro game, Mutant League Football with beautiful 3D graphics and impressive gore effects.

Take a look at the Kickstarter trailer and a couple of Steam screenshots below.

Just in time for the real-world Super Bowl.

Brutal sports title to make a second half comeback? 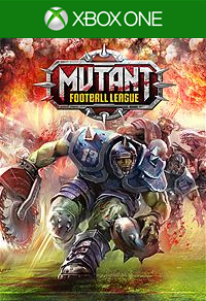