It seems like just the other day that we shared with you the minimum and recommended PC specs for the upcoming Steam PC release of Daemon X Machina, but now a couple of additional details have surfaced with regards to Marvelous' mech-filled actioner.

According to information gleaned from GameSpark (via good ol' Reddit) we can expect the following:

As mentioned above, it's worth noting that certain DLC drops won't be included in the PC release, with third-party collaborations (such as the one involved Geralt and Ciri from The Witcher series) left behind, although we are told that "all content updates including new Arsenal gear, cosmetic options, Colossal Immortal battles, and a co-op Exploration Mission mode" will be included, so there's that.

Daemon X Machina landed on Nintendo Switch last year, and you can read our review right here if you'd like to know a bit more. PC players don't have long to wait either, with the Steam release planned for February 13.

"We envisioned that Daemon X Machina would be a solid return to form for the once-beloved mech shooter genre, but sadly things here just didn't live up to our expectations."

Shortly after the reveal of the recommended and minimum PC specs, a few new details have come to light.

More mecha action is on the way for PC players with the once Switch-exclusive landing on Valve's digital store this month.

We got our hands on the Switch-bound exclusive at this year's Gamescom.

We find out more about the upcoming mecha shooter ahead of its September release on Nintendo Switch.

Daemon X Machina is getting PvP multiplayer after launch

It won't be there on day one but after launch, Marvelous will be updating the game with competitive modes. 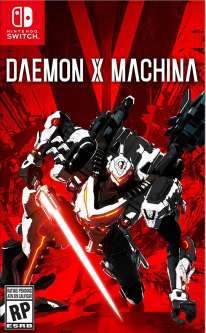