I swear I can't remember the last time a videogame has whiplashed me through as many emotions in such a short space a time as NBA Jam. Elation, suspense, fury and anger and everything in-between has bolted over my face, intensifying and accelerating as the clock ticks down to the closing seconds of matches which hinge on a single-point advantage.

Case in point - my girlfriend has known me for over two years and last night was the first time she's seen me scream obscenities at the TV. And in a household were our flatmate regularly subjects us to reality TV shows to the point my brain wants to explode, that's something.

But that's the beauty of NBA Jam for you. It retains the excitement of a sports game but keeps the dynamics as simple and as short as possible to capture a far-wider audience- you'll pick up everything you need to know in under two minutes in Jam's new tutorial mode. Move, dunk, push. There are small variations within those three attributes, but you can quite happily start to play with those basics. Basketball, like most sports, isn't for everyone. NBA Jam, however, is. It does to sports games what Mario Kart does to racing.

The gameplay - the foundations of which are two-on-two court action, shoving allowed, OTT dunks and commentary - still holds strong some seventeen years since gamers attempted their first last second three-pointer from the back of the court to win a closely-fought game.

Your pulse quickens alongside the game's tempo as even-sided point scoring suddenly erupts into a score-streak as you successfully snatch the ball repeatedly from your opponent. There's a genuine thrill to stealing the ball, rushing the length of the court and scoring a dunk, more so if you're playing against a friend.

Same as ever, Jam tastes best when you're matched with three friends on one console, though the new online mode eradicates unwanted solo plays if you so desire. but the flip-side of that coin is that as before, tackling matches alone doesn't stack up against multiplayer under extended play.

Testing and finding out the various players' particular kinks during matches is an interesting, and for later matches, much-needed addition to the gameplay. Due to the two-man setup you'll spend much more time focusing on individual players, and therefore you find yourself adapting your on-court strategy to your their strengths and weaknesses fairly swiftly. Its much more immediate and enjoyable than playing top Trumps with endless statistic screens.

While the developer has wisely has strayed away from tampering with the classic gameplay - expect no Sonic 4 arguments here - it has attempted to bolt on a few extra modes to expand the vanilla package. It's truly a case of 'damned if they do, damned if they don't' situation, and despite the promising description, the modes are not likely to replace the Classic Campaign as your Friday night mainstay.

Remix mode litters the court with performance-effecting power-ups, but these are slight tweaks, such as speed ups, and the game's pace is frantic enough.

Domination seems more promising, requiring teams to shot and score from specific spots to 'own' and subsequently earn points off them. But in tightening the focus of the game to one net the developer has chopped the court in half. The play area is too small to develop attack strategies and the game devolves into near-unavoidable elbows and ball-stealing shoves.

There's still some fun to salvage from the additional modes as a break from the main game that'll absorb most of your time, and the game is rammed with nice flourishes, such as unlockable characters and the ever-quotable commentary. The biggest issue with NBA Jam is its price.

Originally the game was to be a Wii-exclusive digital download that came bundled with this year's NBA Elite 11. The game was soon upgraded to a Xbox 360 and PS3 release and has replaced the canned Elite as this winter's main NBA retail release.

There's only conjecture as to what price point this would have hit at if it'd arrived via a digital download, but it for sure wouldn't have been touching the thirty pound price range. Impulse buy and nostalgia only stretch so far. In this day and age we're used to re-purchasing gaming classics, but that's with a considerable drop in cost. Despite the new modes this is still the seventeen year-old game that we paid forty pounds for, repackaged in a shiny new box.

The game's arcade origins mean its built to be played in short bursts and for maximised enjoyment to be played with friends. However, there's a few games in recent years that the same argument can be laid against. and we doubt many of those will be used half as much as an NBA Jam disc will. Once you own it, its unlikely to be far from your disc tray when your friends are around. two decades on it will be, and is, as much a part of a social gaming night as Rock Band.

With so many new big-name titles out right now I couldn't recommend buying NBA Jam as it is over them. The Jam needs a bit more in its filling to claim an essential purchase. When the game drops in price though (and it will), you can slam-dunk another one-pointer onto that score.

Gamereactor UK
+
+quaility of core gameplay not dminished +one of the best multiplayer gamer on the market +wide appeal
-
- new modes are duff - not convinced on single player longevity - too high a price
is our network score. What's yours? The network score is the average of every country's score

REVIEW. Written by Gillen McAllister on the 26th of November 2010 at 15

EA re-introduces the bite-sized b-ball classic back onto the court, and even after fifteen years on the sidelines it hasn't aged a day. So why isn't it a must buy?

No updates for NBA Jam

Would have had to "sacrifice quality"

The politicians of NBA Jam

Obama, Bush and the Clintons

More on the new NBA Jam 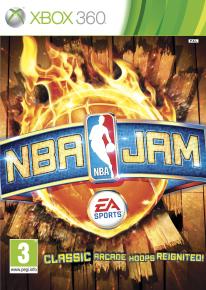