The NBA 2K series is back with this year's edition, which is the first to have been created with the new generation in focus. And it shows. The game is significantly better than last year's version in every way and a lot of work has been put into making the game better where it is really necessary, namely on the court. What still holds the game back from being excellent is that the greed from 2K Sports once again lies like a dark cloud over me when I play. They also ran the trick of not letting people start reviewing the game before it was released so that the reviews would not affect the players' willingness to buy before launch. But alas, here is my review, a little while after the game was released.

Let me start with perhaps the most interesting changes that have come with NBA 2K22 compared to previous years. This year, the developers have really taken turns when it comes to the career situation in MyCareer. We have become accustomed to having a career situation based on intermediate sequences and a few matches in between. Like a movie where we got to play sometimes. This linear way is now gone and the mode has instead been baked into the online hub The City (which used to be The Neighborhood, so you understand that it's bigger). Instead of a movie, we now get more of a sense of online role-playing with an open world and icons on the map where different things take place. The whole story takes place instead on a mission. Like visiting either a reporter to increase your celebrity or playing three-on-three against NBA stars to improve your draft chances. Everything is plotted on the map, but it makes it very unnecessary to run from place to place. The difference from before is that this is not an unknown rookie we play as. MP, as he is called, is an internet star who has recently started playing basketball. Much of the story is therefore about your image off the field.

There are also side quests around town that can be taking pictures of something special or winning a number of matches. Personally, I prefer the previous version of the story mode as it can get a little incoherent now. An example is when I chose one of two agencies. My agent then told me that I should go out and complain about my lack of playing time, even though I had not even had time to play my first match. New for this year is that you can choose between going and playing in college or playing in the G League to improve your draft chances. I chose college, but after my team went out in the first round, I got the chance to play in the G League anyway, or go straight to the draft. This is still the best career mode in sports gaming.

When we are still in The City, I can mention that this is where all online gaming takes place with your created character. Play three-on-three on the street or ranked five-on-five matches in Rec Room and Pro-Am. The problem I have is that it almost requires you to spend real money to have a chance to compete. The character starts with 60 in knowledge level. If you try to play against others at that level, you will have a real problem. In a match I played, as a center, I managed to make six rebounds. The center in the second team, with 80+ in knowledge level, picked up 18 rebounds by being able to jump higher and be stronger. To get me to level 80 I would pay pay some real money (which is different from player to player of course) or play hundreds of matches to earn the currency required. And as properties get more and more expensive, I do not even want to think about what the cost would be to get out in level 90-100. As a free player, it is very difficult to like.

Speaking of costs, MyTeam is back, of course. The 2K games' answer to Ultimate Team is a real cash cow, but they have not bothered to make any major changes. A draft mode has been added, where you select one or two cards from five each round until you have put together a full team. Apart from that, the game mode is almost identical from last year. It is also the game's franchise mode, and actually, there is nothing new to report on here and I would have loved to see some news that matters.

Onto the gameplay then. Here, everything is just as it should be. The presentation is great and the players are usually scary like the real players. This is a beautiful game that unfortunately suffers from long loading times and graphics that lag. Once I had to wait four minutes for a match in The City to load. Once the game is complete, we are offered a much better defensive game than before. It is no longer possible to just run straight through the defense and the players seem to be much smarter. It's also a better flow than before, but where players lose stamina much faster when doing a sprint or dribbling. This means that players who just try to run and dribble quickly will get tired. It is therefore important to find passing routes and use different playing fields, because if players get tired, it will be harder to put their shots as the shot meter becomes smaller. Compared with Madden NFL 22, this is like night and day. Madden is frustratingly bad on the pitch with lots of problems, while it flows really well here.

All in all, this is the best game the NBA game the 2K series has seen in many years. On the pitch, everything flows exactly as it should with many improvements from last year. Microtransactions are still everywhere in the game and to be able to compete online with your created character or in MyTeam, you almost need to spend money. If you have skipped the series in the last year, it may be time to take a look now. It is not perfect, but it has taken a very big step in the right direction.

Gamereactor UK
+
On the court it is great, the best career mode of sports games, good presentation, many improvements.
-
Some technical problems, the most greedy sports game on the market.
is our network score. What's yours? The network score is the average of every country's score

REVIEW. Written by Johan Vahlström on the 22nd of September 2021 at 09

This year's version of NBA 2K is here, but has the game taken enough steps forward to raise the quality from previous years?

DUX Gaming will be the 24th team in the league.

Cover athletes for different editions are revealed as well. 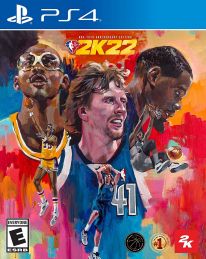