It should be said right away that NBA 2K17 is very similar to last year's edition, especially in terms of the Story Mode. We started by creating an aspiring basketball star (you can import these from the Prelude) and then starting our career. We started at college level and after a season of this it was then time to tackle the big league and make a name for ourselves. This is a basic introduction to Story Mode which was also included in last year's edition, and this year suffers the same problem of mediocrity. The issues of poor directing and stiff acting apply as much this year as they did last year. The pace is good and the concept is great, but that's not enough.

Gameplay and playability, on the other hand, are pretty much unchanged, but that's not a bad thing at all. 2K has refined some aspects from last year's game, from triple passing to the shooting system, with good results. In NBA 2K17 it is silky smooth to control the players and the animations are almost perfect. Every dunk is satisfying and systems for turn-arounds and defence feel very good. Play feels snappy and responsive, making turns and counter-attacks are a joy to perform.

If you need to up your skills, there is also an excellent training mode called 2KU, and here you will be coached by none other than Coach K, Mike Krzyzewski. Here you'll learn all about passing, counter-attacking, shooting and blocking, and it is deep enough that even NBA 2K veterans can learn a thing or two.

Besides the modes already mentioned there is a MyGM / MyLeague mode. Here you can choose to play as the manager of a team and just play the playoffs or a whole season with any settings. As a GM, you'll need to take care of everything that a boss of a sports team does, including finances, staff and players, whilst also keeping an eye on the team's performance overall. MyLeague is exactly what it sounds like and is available to play both online and offline. There are lots of configuration options which you can tinker with and you can play with only NBA teams or pick up and decide entirely for yourself how the league will be designed and what teams should be included.

An additional mode called "Start Today" is due in late October as well and it's supposed to let you start straight into the current NBA season and play with your favourite team with all the scores, standings and injuries intact from reality. It was not available time of writing but is very likely to be a blast once it starts. A full online mode is of course also included with virtually all game modes from the main game in there. Of the games we've managed to play it has worked well with a good flow and virtually no delays or hiccups to speak of.

Graphically, the game is a delight to behold. Player models are magnificent, and during the match the game is so neat that it is easy to believe that there is an NBA game playing out on the screen, and not a video game. The sweat runs on the foreheads and along arms and besides some clipping problems and a few characters that look flat and lifeless in the game's cutscenes, everything is incredibly neat. The same applies to framing and presentation, as the menus are handsome and slick throughout.

Even the sound is really impressive. Shoes squeaking against the floor, the ball sounds and commentators are all at a very high standard, and the audience's way of increasing the pressure at important moments is fantastic, each match feeling suitably intense as a result.

NBA 2K17 is a great game that depicts the sport almost perfectly. Gameplay-wise it is wonderfully tight and intense, the graphics and sound only adding to the experience. Game modes leave nothing to be desired and jumping right into the season with the "Start Today" feature is very exciting. The Story Mode could have been taken further and it strikes us as slightly odd that 2K seems to rush this instead of giving it the time and love it would need. This isn't ruinous, though, and since the gameplay is great the little niggling things can be forgiven. NBA 2K17 is as close to a three pointer as you can get and no basketball fan should miss it.

"NBA 2K17 is as close to a three pointer as you can get and no basketball fan should miss it."

In an effort to get into esport, the NBA joins Take Two

A championship will start in 2018.

Featuring gameplay for fans to get excited about.

Thierry Henry will be playable in NBA 2K17

Yes, you read that right.

NBA 2K17 tips off early with The Prelude

Got started early on your career with "The Prelude" on September 9.

Karl-Anthony Towns is the cover star of MyNBA2K17 App

NBA Rookie of the Year to be the face of the app. 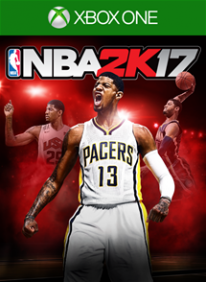