We enjoyed NBA 2K15 a lot and for many reasons, perhaps the main one being that you could integrate yourself into the game via a facial scan. You simply have to use the PS4 camera, scan your (no doubt beautiful) mug, then customise hair, eyebrows and beard and import yourself into the popular MyGM and MyCareer modes. Stellar stuff. Add to that there's the integration of Pharrell Williams and NBA stars like Kevin Durant and LeBron James. We found ourselves asking how Visual Concepts could possibly top this.

The UK version gets the American cover with Stephen Curry, James Harden and Anthony Davis, and there is also a version with the one and only Michael Jordan. The soundtrack, which was released on Spotify in July, includes 50 songs - more than any other NBA 2K game before it. Responsible for the tracklist are heavyweights like DJ Khaled, DJ Eyes and DJ Premier. There are six playlists, one for each of the DJs, one with international songs, one with the "Fan Favorites" from past NBA 2K games, and one with all the songs. There is something for nearly everyone here.

When it comes to the visuals, NBA 2K16 has hardly changed compared to its predecessor, but remains on par with the latest and most graphically stunning games, regardless of genre, and therefore it has nothing to be ashamed of. The NBA players and the coaches look confusingly similar to their real life models. But it's not just down to reproducing the look of the players that makes NBA 2K16 an experience that could be mistaken for watching a game on TV. Peculiarities of individual players - things like Stephen Curry chewing on his mouthguard on the free-throw line, the photobombing of Nick Young, or Chris Bosh and the "High Five" thief Kobe Bryant - takes the game to a whole new level of authenticity.

In addition to the thirty NBA teams, twenty-five Euro teams and the usual Classic Teams, twelve new historical teams have been integrated, including fan favourites like the 99-00s Toronto Raptors with Vince Carter and Tracy McGrady, Dallas Mavericks from 02-03 with Steve Nash and Dirk Nowitzki, and Boston Celtics' 07-08 team with the "Big Three".

After the last few years with very few changes in terms of gameplay, the development team now surprised us with customised game controls. After years of us developing the same habits, the change in the pass and low-post control initially leaves a bad taste in the mouth, but with some time and after a few games, the structure and low-post game actually comes across as even better and more realistic. With the 2KU mode there is even a playable tutorial to guide us through the complex controls that the game requires players to master

The artificial intelligence of your own team and your opponent's has changed noticeably. The team at Visual Concepts have responded to changes to the real-world game, and has integrated these (including new offensive game plans like the "Small Ball" concept of current NBA champions Golden State Warriors). New defensive systems can also now be found in the game. You can influence your team's tactics either via the coach or using call plays with the shoulder buttons or D-pad via the corresponding tactics menu, choosing moves more casually while you play.

The highlight every year is the career mode. With Spike Lee's involvement in NBA 2K16 adding something very special to this game's MyCareer. Spike Lee wrote the storyline for the mode and has also been involved as a director and producer on NBA 2K16. Right from the beginning of our career we're impressed by Spike Lee's contribution and immersed in the story that sees us rise through the ranks, starting in Harlem. We begin our basketball career at the Fairview High School Tornadoes, and from there we progress to the highest level of the game. After high school you choose a university and then get signed as a top talent in the NBA Draft, hopefully realising your dreams along the way.

The inclusion of Spike Lee is a stroke of genius for Visual Concepts. Basketball nerds like ourselves will see parallels to Lee's film "Game of Life". The ability to create your own shirts and arenas is also an impressive touch that we appreciated. NBA 2K16 is an amazing looking and atmospheric game that captures basketball like no other, and once again it's our favourite way to shoot digital hoops.

Gamereactor UK
+
+ Great atmosphere, Spike Lee authored story, new historical teams.
-
- Too demanding for newcomers.
is our network score. What's yours? The network score is the average of every country's score 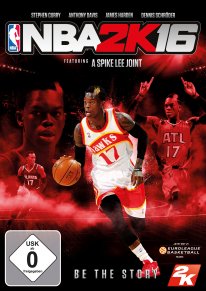