I only know it from watching. A beautiful sport, but I may have been lacking in the experience for the NBA 2k13 copy landing on my desk for review. But then, you need to gain experience to have any.

I start by creating a myPlayer account. When that is done, the screen goes black and hip-hop beats start booming out of my headphones. Jay Z appears and begins to rap. Then the NBA-Stars appear. They fly through the air and smash one ball after another into the rim. I'm starring at the screen mesmerised. The intro is definitely good.

I rush into the first game: Boston Celtics against Orlando Magic. The game presents itself in the typical style of an NBA Live broadcast. The spokesmen are commenting, the cheerleaders are dancing - loud music and flashy colors dominate the scene. Then the players enter the court, demand attention and the crowd is willing to provide.

The game starts and my grin disappears. My opponents are literally killing me. They intercept my passes, steal my ball, catch every rebound and fly over my players as if they were tin soldiers. This is annihilation - but beautiful to look at.

So, I'm back to the menu. Here I choose myCareer to start as a Rookie NBA-contender to impress the scouts. In the training mode, I make myself familiar with the basic movements. I have to be careful not to spend too much time here though. I could spend hours listening to hip-hop while rehearsing the countless moves. Shooting, dribbling, Post Game, Offense, Defense - each aspect is a science of its own.

After a while I feel ready for my first game and who would have guessed- I'm not doing so bad. Because I only have to look after one player I can focus on passes, dribbles and so on. The scouts are always watching and punishing each bad pass with grade loss. Eventually I succeed with my first dunk and my value increases. In the end, I save myself with a B-rating and actually get recruited for the NBA. It's on.

NBA 2k13 is pure basketball. The unique atmosphere of the sport swept over me in a flash. Loud, flashy and boastful - and that's why it is so cool. Eccentric players, powerful dunks and hip-hop beats are as much part of the game as the cheering crowd. What happens off the courts is equally important. NBA is higher, wider, faster - a sort of modern gladiatorial combat, where only the fittest survive. NBA 2k13 conveys this feeling wonderfully.

The visuals look great, (at least on the PC version). The console graphics unfortunately lag well behind. In the heat of the game you don't notice it. The focus is on the players, you moves. In myCareer, where we find the time to take a closer look at the environment, the sometimes blurry and pixelded textures are noticeable, though.

Animation and physics in NBA 2k13 are unbeatable. The dribble moves, dunks and tackles look great and fit seamlessly into the running movements. The momentum of the players has an effect on their speed. So we can smoothly pass by our opponent when he responded to our ruse. If not, we collide with him. In this regard, NBA 2k13 feels very realistic. The satisfaction is therefore all the greater when we move to the basket past three players.

The gameplay is challenging but easy to get into. The left stick controls our players and the right stick controls your feints and dribbles. Only at the end, we derive a button for a dunk or throw distance. The moves are at least as numerous as Tekken, and although we don't have to know them all, we would like to. NBA 2k13 wants us to constantly get better, and offers the complexity to do so.

When It comes to music you can hear Jay Z's involvement. Apart from a Coldplay song, the playlist consists almost entirely of hip hop, which fits nicely. But besides that, NBA 2k13's audio is very appealing. The players shout commands, if we stop abruptly we hear our soles squeaking on the floor and the commentators do a great job. Only in myCareer mode is the bad voice-acting is noticeable. Whether white or colored, thick or thin, our players always sounds like a 140-pound ghetto gangster with an IQ of 55.

We struggle with the length of the game in myCareer mode. Post-game interviews are neither particularly interesting nor linguistically well implemented. In the announcing nominations for the NBA we stare almost ten minutes onto a pixeled stage, just to await our name. That we can invite our colleagues to dinner and increase our popularity, and we can ask for a personal meeting with the general manager is great, but somehow pointless. A nice distraction is the shop, where we spend our virtual credits (VC). There we find everything a player could wish for: Finger Tape, basketball shoes, hoodies, shorts, etc. The extent of the shop is considerable.

Ultimately, the focus of NBA 2k13 on the gaming experience, and that's great. The atmosphere, the players - everything feels wonderfully alive and authentic. I have never played much ball and probably won't do so in the future. But real life limitations don't matter so much now, since I can play NBA 2k13.

Gamereactor UK
+
+ Great feel +Presentation top notch + Extensive training options
-
- Some realistic elements of career boring.
is our network score. What's yours? The network score is the average of every country's score 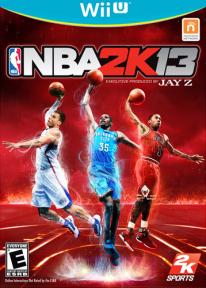