Naughty Dog's last remastered game The Last of Us Remastered was very well received by critics and players, and it managed to shift quite a few copies. Eric Monacelli works as a community strategist at Naughty Dog and he told MCV that this was due to the fact that a large portion of players on PS4 didn't own a PS3, where the game was originally published.

Now Monacelli is anticipating a similar trend with Uncharted: The Nathan Drake Collection. According to Naughty Dog's research, about 80 percent of PS4 owners have never played Uncharted. This means there's a market for the remastered collection, and it also was one of the reasons they decided to remaster the original trilogy in the first place.

If you haven't done so already, you can read our review of the game here. Go and see if the charm of the older games hold up.

"Sometimes the studio are only making subtle adjustments, but they feel almost invariably good."

Sony gives away Uncharted and Journey for free on Playstation 4

If you're looking to play some gems you've missed or if you want to revisit old favourites, Sony is giving away Uncharted: The Nathan Drake Collection and Journey for free.

Nathan Drake is heading to PS Plus in January

The Uncharted collection is one of this month's free games, and the other one is Goat Simulator.

Hennig: it's getting harder to make narrative-focused games

According to the former Naughty Dog developer, the first Uncharted title simply wouldn't cut it in today's market.

The Uncharted series has sold 28 million copies to date 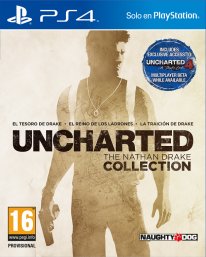