Saint Seiya, Dragon Ball Z, One Piece, Bleach, and JoJo's Bizarre Adventure are some of the Japanese animated series that have been treated to multiple video game adaptations, with varying degrees of success. None, however, came close to what CyberConnect 2 accomplished with the Ultimate Ninja Storm saga. Although flawed in many areas, Naruto: Ultimate Ninja Storm, released in 2008, was superior to almost any other game inspired by Naruto or Anime. It says a lot that after six chapters (don't forget Generations and Revolution), Ultimate Ninja Storm continues to impress at times.

This doesn't mean that the game is near perfect, because it's not. The combat system is still too simple, the exploration sections can be incredibly boring, and there is a lot of recycled content. Few series have produced six games with so little progress between the first and last chapters. The fact that Ultimate Ninja Storm 4 marks the debut of the series on PlayStation 4 and Xbox One, completely letting go of PS3 and Xbox 360, should also have been met with more obvious changes and improvements. Since all the other chapters are on last gen consoles, it seems unfair that this latest episode is released only for the current gen and PC, especially if the game itself doesn't show a smart use of the new hardware.

Don't get us wrong, Ultimate Ninja Storm continues to be, in our opinion, one of the best representations of a Japanese animation. Although simple, the combat system is fun, and visually it can sometimes even surpass the spectacle of the animated series. Ultimate Ninja Storm also must be praised by having very faithfully recreated the whole Naruto adventure, from the beginning of the original series, to the ending of the Shippuden era.

Naruto Shippuden: Ultimate Ninja Storm 4 starts where the third chapter left us, near the final act of the Fourth Great Ninja War. It's a short affair, but it's full of intense battles, and some amazing visual moments. For this game, and possibly because most of the action takes place in the same locations, CyberConnect2 decided to divide story and exploration into different modes. Now you will follow the story through individual episodes, contextualized with still images of the original animation and voices from the actors (the Japanese version is also available).

The exploration section was then adapted to a new adventure mode, which takes place after the events of the main story. In fact, the game even warns you should not start the adventure mode without first completing the story. This mode lets you explore many locations in the world of Naruto, but there's also clear recycling of much of what we've already seen in the past. The city of Naruto, Hidden Leaf Village, is fully modelled in 3D, but still requires (very fast) constant loading. That should not be necessary on the new generation of consoles.

In another example, the city of Gaara, Hidden in the Sand, uses pre-rendered, 2D environments. Two examples of cities that use completely different structures due to recycled content of different games. In adventure mode you will try to complete boring goals and take part in some battles without any relevant context. The most interesting point is perhaps having the ability to relive some of the past battles, while Naruto, Sakura and Hinata recall the most memorable moments of the entire series.

In addition to these two main modes, you can also try your chance in the online mode, and several variants of versus mode. You will see something like one hundred characters to try out, although some are variants of the same character (there's three or four Narutos, for example). There are also several collectibles to unlock and buy in a special store with money collected during the game (no micro-transactions).

The combat system includes some new features, although they are more superficial than significant. The biggest change is be the ability to switch between characters on the fly. In earlier games you could form teams of three fighters, but only one was playable, while the other two were limited to providing support. In Ultimate Ninja Storm 4 you can switch characters in real time, nudging the right analog stick. There are also some cool new combos between characters, and some even include special abilities that are only available with two specific characters, such as the combination of Sasuke and Naruto.

Graphically, there is some improvement. The game is more defined, and the attacks benefit from better particle effects. You can even break their "armour" (in some cases these pieces of armour might be a belt, for example), if you do considerable damage to your opponent. Despite the improvements, they are not enough to justify the generational leap, or the absence of the game on PS3 and Xbox 360. Even so, the graphical quality of the series has always been one of its greatest strengths, and it remains so in this game. Story mode in particular includes some truly spectacular sequences.

Naruto Shippuden: Ultimate Ninja Storm 4 is not a big improvement compared to the previous chapters. The series never really evolved all that much since the original, and even with this move to the new consoles, that fact remains. And has been the case in the past, Ultimate Ninja Storm 4 is a fairly mediocre fighting game, but a fantastic recreation of a Japanese animation. It is an experience that is much more interested in the visual element then in actual gameplay, and that's not necessarily bad considering its context as a game based on an anime. If you watched the anime, and enjoyed the previous chapters, there is no reason to leave this last chapter out of your collection.

HQ
Gamereactor UK
+
Impressive range of characters. Sometimes is even more spectacular than the series. It includes the English and Japanese voices.
-
Simple combat system. Graphics over gameplay. Recycles a lot of old content.
is our network score. What's yours? The network score is the average of every country's score 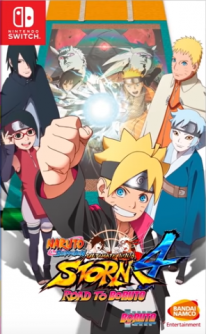