Dead Toast Entertainment and Devolver Digital released My Friend Pedro last month to introduce players to slow-motion action with epic stunts and a talking banana (it's as wild as it sounds - just check out our review), and it seems this concept has translated into good sales for the game.

Devolver Digital has revealed on Twitter that the game has sold 250,000 units in its first week, and we also have a Behind The Schemes video, in which developer Victor Ågren talks about the ideas behind the game and how he got into games in the first place.

If you have no idea what My Friend Pedro is all about, the launch trailer below should give you some sense of the tone Dead Toast is aiming for, and you can see some of the action-packed gameplay in the Behind The Schemes video as well.

Have you given it a go yet?

"The game peaks when you start dealing with shotguns and the metallic elements, allowing for some delicious bullet rebounds."

My Friend Pedro seems to be headed for PS4

To mark the impressive figure we also have a Behind The Schemes video explaining how the game came to be.

My Friend Pedro releases on Switch and PC in late June

Indie shoot 'em up from Deadtoast and Devolver Digital is coming to the Nintendo eShop and Steam later this month.

The Nindies showcase had plenty of games to tell us about

We've compiled a list of all the games we've yet to talk about, including My Friend Pedro, Swimsanity, Blaster Master Zero II, and more.

My Friend Pedro is "a violent ballet about friendship"

Creator Victor Ågren explained the chaotic action game to us. 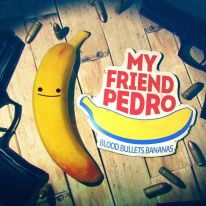