Marvel vs. Capcom: Infinite, Resident Evil 7: Biohazard, and Nintendo Switch versions of Monster Hunter XX and Ultra Street Fighter II drove Capcom's first half of the fiscal year 2017 for a net income of 3,481 million yen (up 757.5% year-over-year), according to a recent financial report from Capcom, and sales and operating income in the Digital Content Division grew stronger "driven primarily by increased sales of new titles in Consumer" as well.

In regards to MvC: Infinite, this shipped 900,000 units in the period ending September 30, but the game was released in the second half of the month. Capcom also revealed that RE7 adds 600,000 copies more and sits now at over four million copies sold prior to the release of the Gold Edition, coming in December worldwide.

For more on the financial report check out the whole thing here. Are you impressed with Marvel vs. Capcom: Infinite?

"It has the potential to become a fantastic fighting game. The core gameplay is very entertaining and the controls feel great."

Marvel vs Capcom: Infinite is now a Play Anywhere title

And we've also got a price drop too.

This comes a week after it's removal from Evo.

Marvel vs. Capcom: Infinite free to try on PS4 this weekend

Some of these will just be for PC and PS4 for now. 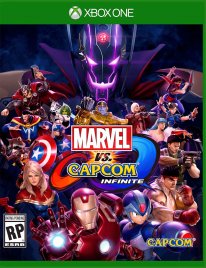