SMG Studio's Moving Out ended being one of our favourite indie surprises of the year. Much like Overcooked, it had us screaming at our friends and family, as we desperately tried to complete objectives together in a set time limit. It's a fun game, that's for sure, and we were pleased to see over the weekend that the studio had teased some upcoming content.

On the game's official Twitter, the studio posted: "Since we launched Moving Out on April 28, our team has continued development for new content and to expand the game in interesting ways. The results of that work are coming together nicely but we're not ready to share yet. All will be revealed in early 2021."

All we can do at this point is speculate as to what might be added, but we do have a wishlist. We would love for online coop to be added or some themed DLC to take us to strange locations. Moving house in an old gothic castle, for example, would be pretty fun.

The addictive party game is set to expand early next year.

Moving Out has moved in on PC and consoles

The wacky moving simulator Moving Out is officially available on PC, PlayStation 4, Switch and Xbox One.

Moving Out - Unpacking the Demo

PREVIEW. Written by Lisa Dahlgren on the 7th of February 2020 at 15

We got the chance to try out an early version of delightful co-op title Moving Out ahead of its planned release in April.

Moving Out is set to release in April

The hilariously whacky co-op moving simulator Moving Out is set to release late April of 2020.

We have a free demo to try for 48 hours from today, giving us a taste of the full product coming next year. 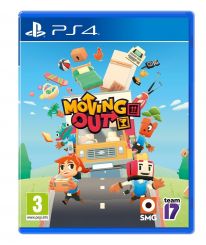