With digital services such as Steam and Xbox Live Arcade raking in the money and PSN starting to catch up, it becomes clearer with each day that Wiiware is the whipping boy of the digital services. Whether it's the lack of major Nintendo funded projects, or the lack of third party support, or simply the nature of Wii owners and their habits that's at fault can be argued, but the fact remains - Wiiware is nowhere near as successful as it could have been.

It must be said that RedLynx know all there is to know about being on an unpopular platform. After all, they started out making games for Nokia's ill-fated N-Gage and in fact created some of the most memorable pieces of software to hit the clunky gaming phone. But it wasn't really until they released Trials 2, and perhaps even more so with Trials HD on Xbox Live Arcade that they really made it big. But why would they want to make a game like MotoHeroz on Wiiware, wouldn't it have been smarter to stick with Xbox Live Arcade for the project?

Perhaps the main reason is that RedLynx wants to avoid being associated too heavily with one platform, and to be honest, Moto Heroz is a perfect fit for the Wii demographic. The only problem is for RedLynx to convince this demographic to log onto the Wiiware service and buy their game. I guess that's where we in the media have a part to play.

MotoHeroz could be viewed as something of a bastard child of Trials HD. The same mechanic of shifting your weight is there, but apart from that and your objective of reaching the goal line there is not a lot the two games have in common.

MotoHeroz sports three main modes. The story mode, which you will be playing on your own with slightly different kind of objectives, with races and chases making up the bulk of the gameplay. Then there is the online mode, which really is just a way of focusing the players on competing and posting their times from a few maps each day. RedLynx will make a few levels available for play in the online mode each day, and players will compete to register the best times. At the end of the day a winner is proclaimed. A great way of creating excitement and motivation for players to compete every day, rather than just making use of the standard leaderboards. Given the chaos that is party mode, it is also a good idea to separate the serious competition from the more chaotic fun that occurs with several players on screen at once.

As you can imagine party mode is a bit like a condensed version of Super Mario Kart seen from the side with vehicles bouncing every which way, leaping over each other and trying to keep up and not fall behind. There are power ups, but to be honest I didn't even notice what they did during my brief play session, it was all about trying to reach that finish line. It's really evident how the way you balance your little vehicle creates infinite depth and replayability. What if I try and lean forward for this section, or back over here, switch in the middle of a jump, and so on. It's a very simple premise, much more forgiving than Trials HD, but still with more depth than what you would initially think from just watching the game in action.

With a hundred or so levels, and plenty of action to be had in three different modes MotoHeroz looks like a title that should have been there from the start of the Wiiware service. Maybe then more people would have tuned in.

We chat with Red Lynx co-founder

"As you can imagine party mode is a bit like a condensed version of Super Mario Kart seen from the side."

Next from Trials HD developer

Thank you for your time. We will take care of this matter as soon as posible
Looks like great mutliplayer fun 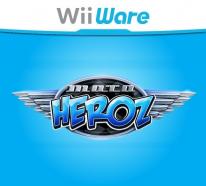