Blink and you could miss the staggering amount of releases launched by Milestone Games throughout this year, as the Italian studio has treated fans to new iterations of many of its established franchises such as MXGP and it has also ventured into new territory with the launch of Monster Energy Supercross earlier in February. One of the studio's most eagerly anticipated annual releases this month makes a return and finally ditches the aging in-house engine that fans have long groaned about. MotoGP 18, the latest entry in the series, boasts the inclusion of drone scanning technology, and has seen many subtle under-the-hood tweaks to up the realism the series is widely known for.

The career mode sees you shape your own future champion before partaking in the RedBull MotoGP Rookie Cup, a short series of races where you will earn your stripes racing on less powerful bikes. As you progress you'll receive offers to join different teams and they will reward you with new bikes, although they'll also add the pressure of performing to their expectations. The loop of joining better teams, riding better bikes, and competing against better racers on tougher tracks is an addictive one, although it's not something we haven't seen in previous entries. Embedded within the career is also a comprehensive bike editor where players can tweak their ride to suit their play-style and conditions, whichi is where we spent much of our time tinkering away to find the best results.

If you fancy taking a break from your ride to the top there's a handful of quick and online modes that you can jump right into. There's a Time Attack mode where you compete against others to get the fastest time on online leaderboards and also a Championship mode where you play a succession of races of your choosing after selecting between 24 of the world's finest racers. Multiplayer modes see you take the action online in public and private lobbies and there's even an Esports Championship that is said to open this July that will be open to all players. Making it into a race online always felt fluid thanks to a well-constructed UI and we loved racing across the many gorgeous tracks seen in the career against the heightened threat of human opponents.

For new players, we'd certainly recommend taking a dive into the tutorials included in the quick menu before starting your career. These essentially offer a zero pressure way of getting to grips with controls that demand precision and can be tough to get used to during the heat of your first few championship races. There is a brake assist function enabled by default and a rewind function similar to the one in the Forza series, where you can recover from mistakes, but these features (especially the latter) should be used wisely as they can cost career progression points. We wish that Milestone had included more prompts during the start of the career for anyone looking to jump right in though, as the learning curve can be fierce and there's no initial guidance without looking elsewhere.

Returning fans will appreciate some of the smaller tweaks that have been made to make the series a more authentic racing experience. Tire temperature and wear are two new factors to be considered when tearing up the race track at high speeds and scalable damage is also included, causing your bike to slowly take deteriorate if you venture off the track and onto the surrounding terrain. The AI has also been enhanced here as well as the bike physics and collision system, so toppling off your bike and taking other racers down with has never looked more faithful. It's the little things like this that may go unnoticed by those new to the series, but we appreciate that Milestone is still pulling out the stops to try and make the series true to the sport itself.

The franchise has finally scrapped the aging in-house engine used on many of its previous entries too, instead utilising the power of Unreal 4 to deliver its best-looking iteration to date. We especially admired the weather effects that always looked great whether we were trudging through a rain-soaked stretch of track or trying to wade our way through the thick fog before us, not to mention the short video montages that play before a race that really helped to immerse us in a country's culture by showing us snapshots of wildlife and local architecture. This worked to add a layer of realism and it really felt like we were traveling the world as we worked to build our reputation as a fledgling rider. All of the 19 tracks from the 2018 season have been polished and the new drone scanning technology implemented means there are minor details present that are certain to please those who are die-hard fans of the sport.

Fans may have been disappointed with the marginal improvements seen in previous instalments, but we feel MotoGP 18 offers a much bolder step forward for the series, ushering in a much more polished visual finish (thanks to the Unreal 4 engine) and refined features that lead to a more authentic experience overall. We loved the depth that was expanded upon for more experienced players and how Milestone had poured so much energy into making every location you visit feel like its own place with a unique identity. It can feel overwhelming to get a grasp of the rather demanding controls and the career doesn't differ too much from previous entries, but if you've held off the franchise in anticipation for something new you might want to give this one a look.

Gamereactor UK
+
MotoGP 18 is the best-looking entry to date, It adds to the realism with new features like scalable damage, Bike customisation is addictive and comprehensive.
-
It presents a steep learning curve for beginners, The career doesn't differ too much from previous or similar titles.
is our network score. What's yours? The network score is the average of every country's score

"It boasts the inclusion of drone scanning technology and has seen many subtle under-the-hood tweaks."

We take to the track ourselves.

A glimpse of the Misano World Circuit Marco Simoncelli.

The MotoGP franchise returns on June 7. 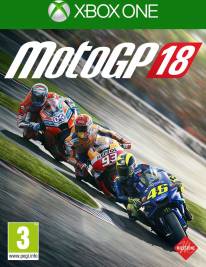