It was at The Game Awards where Mortal Kombat was finally revealed for the first time after tons of rumours and speculations about a sequel, and while we've already reported on a new product listing for the Premium Edition - listing six DLC fighters - there's also something that might interest esports fans in there too.

In the listing from GameStop Italy we see that the game is listed as having a "strong multiplayer component, entirely oriented towards the esports". These are bold words, especially since the game is "entirely" focused on the competitive side of things, so it seems like Netherrealm Studios certainly has the Fighting Game Community (FGC) in mind for this game.

Mortal Kombat X has had its fair share of success in esports already, as has Injustice 2, but neither has hit the heights of Street Fighter V, so perhaps this is an attempt to get Mortal Kombat 11 among the best of the best when it comes to fighting games. No doubt they'll be aiming for big competitions like Evo too, and hopefully we'll see their own ones after release as well.

Do you watch Mortal Kombat esports?

And the series has sold over 73 million console units.

There will be no more DLC support for Mortal Kombat 11

Netherrealm Studios is shifting its focus to the next project.

Kerri Ann Hoskins wants to star in a game again

Ed Boon would rather his head remains firmly attached to his body.

Christopher Lambert is back as Raiden in Mortal Kombat 11

His interpretation is available as part of a new Movie Skin Pack. 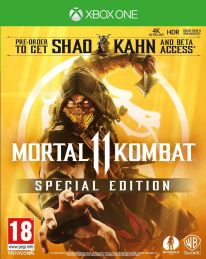