During yesterday's Monster Hunter Digital Event, it was revealed that Monster Hunter Stories 2: Wings of Ruin will release on Nintendo Switch on July 9, 2021. Along with the release date reveal, a new trailer for the game also made its debut and this can be watched above.

In addition to all of this, it was announced that three exclusive amiibos (Ena, Razewing Ratha, and Tsukino) will be launching alongside the game on July 9. A Deluxe Edition was also unveiled and this contains a new Kuan Coat for Ena, two new layered armour sets, and much more. You can check out the contents of the Deluxe Edition in the image below this story.

A broadcast showcasing new gameplay from Monster Hunter Rise is set to air today at 14:00 GMT (15:00 CET) and a Community Livestream is set to follow on March 11.

Update 3 is expected to be available starting from September 2. 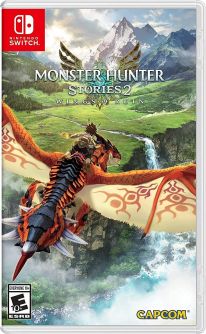