When playing through the first hours of Monster Hunter Generations, we uncovered some new details in the game that make for a more rounded experience. However, we also found the first part of the game to be a bit dull, especially for veteran players. Old tutorials that we saw in Monster Hunter 4 Ultimate (but also in Monster Hunter 3 Ultimate) crop up again, for example. We spent our first hours collecting mushrooms, minerals, herbs and insects as part of that tutorial in order to access the more interesting missions - the ones where you can,you know, hunt monsters.

Once past this rather dull rite of initiation, Monster Hunter Generations becomes more familiar, finding a balance between the two previous games. While not as vertical as in Monster Hunter 4 Ultimate, there are still opportunities to get in behind the monster and cause more damage. There are also four different villages in the game, with different NPCs and associated to a specific environment. This leads to different side missions that let players increase each settlement, allowing them to become more familiar with the specific mechanics of each one; drinking cold beverages in the deserts, hot beverages in frozen environments etc. The player gains access to these villages in the early stages of the game, which gives more freedom as you evolve your team, although it also increases the number of low-level missions which makes first contact with each of these locations a bit repetitive.

From the beginning you can choose from four different hunting styles, which have a particular number of attacks and skills assigned. The Guild Style is the most versatile one and allows you to use two special skills, while the Striker Style lets you perform a great number of skills faster. The Aerial Style allows you to propel yourself high, dodge in the air and launch yourself off of barrels, allies and enemies, making the game more dynamic. The last one is the Adept Style allowing you to evade and block attacks in the last second before pulling off devastating counterattacks.

Beyond the hunting styles, which can be changed at any time to fit different play-styles or monsters, there are also special skills associated to these styles and weapons. Basically, you can assign skills to use when filling a meter that will allow you to do a huge range of things, including demolishing attacks, running without wasting energy when fleeing from a monster, or pulling off a special counterattack with perfect timing.

Another addition is the possibility of not only of recruiting up to two felines, but also going on specific missions for these feline warriors. These feel different since they do not have the strength of a hunter but have other advantages such as not needing tools to extract elements or using support abilities to help the hunter. It's a curious addition, but, as with all the new things that Capcom has included in Generations, they give weight to a game that overwhelms with its massive amount of content ranging from the missions in the campaign mode, the arena, and the guild. There are also missions given by the people from the villages, the ones with the felines, and the training missions to master your weapons, hunting styles and special skills. In addition to all of this, you can customise your team and one of the felines that accompany the player. Monster Hunter quite literally doesn't let you stop playing.

A potential negative aspect is the fact that certain elements have been recycled, such as scenarios and the lion's share of the bestiary. This takes the edge off, especially for veteran hunters. Even though the game revisits old environments and offers up old monsters, Generations is the most enjoyable and dynamic Monster Hunter game so far, and the one that offers the greatest possibilities to the player.

This game will be available on July 15 but until then, you can get a demo (a much smaller slice of the game than the one we played). When the full game is out we will bring you our review, but Monster Hunter Generations promises to be one of the best games of the summer so far.

"Monster Hunter Generations builds upon its illustrious predecessor and refines the concept even further."

Capcom promises to keep expanding the game until at least early 2017.

We've endured the tutorials and taken a look at what lies beyond.

The purrfect partner gets new moves for the upcoming 3DS game. 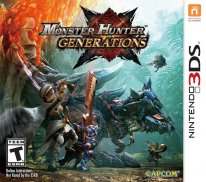