Completely disoriented, I climb down the stairs when the sulphurous smell stings the inside of my nostrils. Down here there's no fresh air, no sunlight. Instead the strange cave is lit by an unnatural yellow light and the stench clouds my senses. My stomach has growled for twenty minutes, I'm running through this cave and my thoughts are already drifting, when suddenly a Tetsucabra - an amphibian-like, heavily-armoured behemoth - jumps out from behind the brimstone and misses my companions by the smallest of margins. We have come to kill this thing, but I was a fool to assume that it would be easy.

Ever since day one on PlayStation 2, the Monster Hunter series has combined spectacular fights with incredible creatures and the feeling of being part of something bigger. The latest instalment, Monster Hunter 4 Ultimate on Nintendo 3DS, does not do much to change the recipe at all. However, the action role-playing game now features a more authentic history and deeper gameplay. Unfortunately Capcom has decided not to develop a Wii U version of the game, thus we are forced to continue our monster hunting adventures on a small handheld - and that's a bit of a shame.

In Monster Hunter 4 Ultimate we again play an ambitious hunter who wants to prove himself. The journey begins in the bustling commercial town of Val Habar, a place that you won't find on any map. Val Habar is a haven for aspiring hunters, because there is much to do. The caravan leader is the first to recognise our potential and immediately engages us in some missions. The introduction is brief and to the point, but it does a good job explaining to new players how the game works. There are only three different types of guild quests: the collection of minerals and other resources, killing some weaker monsters, or a fight against a particularly dangerous creature. If enough quests have been completed in a certain level, the hunter rank increases and more difficult missions open up. This is how Monster Hunter 4 Ultimate works, a hunter must still work hard to climb to the top of the food chain.

After we have spoken with the guild maid and accepted the task, the real work begins. Then the equipment will be checked again and you visit the cook. A hunter should never enter a battle with an empty stomach and the road chef prepares delicious meals for a small fee. In addition to the adventures of Monster Hunter 4 Ultimate, the game tells a story full of entertaining dialogue and brimming with humour. The supporting characters happily talk about their problems and even reflect on their own role within the game. And although the hunter's existence is anything but boring, secondary employment in the villages provides additional variety. There's places waiting to be explored and you can also engage in arena battles. There is also a music hall, which features relaxing melodies for those who wish to linger.

In Monster Hunter 4 Ultimate, two new weapon categories are represented. On the one hand there is the Switch Axe that changes its shape over the course of the struggle and thereby inflicts damage on numerous points of the opponent. Another new addition is the Insect Glaive that scores hits with great agility and special techniques. The weapon also sends out a parasite that weakens a creature and there is also an elemental bonus involved. In total there are fourteen different types of weapons, all with their own set of advantages and disadvantages. Therefore, a skilled hunter must not only specialise in one type of weapon but needs access to a high quality range of different survival tools - depending on the prey that must be taken out.

If you rely solely on your equipment, you are also in trouble. Without the proper tactics the hunter soon becomes the hunted and ends up the meal of a Wyvern. Most melee weapons have an energy bar that fills up by successful hits on an opponent. With the stored energy we unleash violent attacks and combo attacks that cause devastating damage to our prey. Weapons such as the sword hold various stages of damage or temporary attack effects. Of course, these states also have disadvantages and should be used with extreme care. The new fighting system is without a doubt a great addition to the series.

Compared to its predecessor, Monster Hunter 3 Ultimate from 2013, Monster Hunter 4 Ultimate is a lot more accessible. Series connoisseurs will obviously benefit from previous playtime, while inexperienced hunters will have to dig through a lot of text in order to master the basic tactics, guidelines and tips. Of course, this option can be switched off, but it doesn't hurt veterans to refresh their knowledge either.

Monster Hunter 4 Ultimate is also somewhat easier because there is now a personal companion. The small battle kitten has helped me many times by either healing me or getting the attention of the beast I was hunting. The companions levels up during the game and may be adjusted to your needs by using equipment. Even if given direct orders, he is a useful addition to the single-player mode. Soon you'll face really hard challenges during the missions, and you'll quickly learn to appreciate the importance of this feline helper.

Underwater battles are now no longer part of the game, but there is improved mobility for the player-character. In Monster Hunter 4 Ultimate you can ride the dangerous beasts you're fighting - if you reach the back of a creature (naturally it will try and shake you off). Unfortunately climbing felt relatively uncoordinated and could not be easily repeated during the fierce battles, though perhaps that was just an issue for us. The game is controlled via a virtual control pad on the touch screen of the Nintendo 3DS, or alternatively via the digital pad under the Control Stick on your handheld. Both are rather imprecise, but fortunately Monster Hunter 4 Ultimate supports the Circle Pad Pro, which adds a physical C-stick to the 3DS. It should also benefit from the New Nintendo 3DS.

Monster Hunter 4 Ultimate for the Nintendo 3DS is exactly the kind of game that fans of the series have been waiting for. The game gets an injection of fresh ideas, but basically everything remains the same. That there's more accessibility for newcomers is a welcome change, and you won't feel like your being thrown in at the deep-end. The game is still not that easy to get into, but it's much kinder to beginners compared to the most recent entries in the series.

"It still feels a bit clunky and ponderous, and is still challenging. As a result your progress will be slow. But precisely because of that each milestone reached feels rewarding."

Demo for Monster Hunter 4 Ultimate out this week

Shantae and the Pirate's Curse comes to Europe as this week's Nintendo eShop updates are detailed.

A bit of a crash course in Japanese and German.

PREVIEW. Written by Stefan Briesenick on the 15th of January 2015 at 18

We've been monster hunting as Capcom readies the latest game in the series. 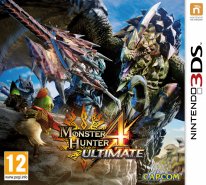