Ryozo Tsujimoto came to Madrid to invite us all to the opening of the new virtual hunting season at the iDÈAME Maestro (hosted by Nintendo). A masterclass in video game designed focused on the creation of monsters. And while we're going to have to wait until March 22 to hunt monsters in Europe, the speech given by the Japanese game producer served two purposes - to remind us of how monsters and eco-systems work, and to ease the fear of monsters or an overly complex experience by throwing in some laughs.

The place could not have been more appropriate - the National Museum of Natural Sciences. On our way to the Masterclass session we walked through rooms full of fossiles, props, replicas, dioramas, and even carefully arranged dinosaur skeletons.

The Monster Hunter team has been doing the same thing for years now. And the producer recognises the importance of studying the bones of ancient creatures. "Dinosaur skeletons makes sense given how they lived their lives in the wild." As an example, Tsujimoto says "weaker dinosaurs could have stronger legs in order to escape."

The monster design process is turned on its head as it starts with a behaviour the game designers need, and then a creature is designed based on those needs.

Obviously, these creatures are all fantasy creations, but that does not mean to imply it's a magicial world they inhabit, "so we look for realism in their behaviour, eco system and movement", says Tsujimoto.

But in order to make the creatures truly credible it's not enough to study their bones in the museum or read books about them at the library. You also have to do some field work. In a zoo, the team is faced with queries such as "why is a lion scary?" and "why is the leopard crouching before pouncing on its prey?".

But all this research and time spent on creature creation isn't just to make the game look good. The real intention here is to create a captivating and entertaining experience for the player. The idea is to evoke emotions as the creatures act the way wild animals would.

"A monster is suitable only when it perfectly fulfills the need as required by the gameplay concept. Not simply as an example of attractive visual design." In fact, for the students in attendance Tsujimoto had the following important lesson on game design to teach, "The gameplay concept always comes first, then you add beer [i.e. add meat]. Never touch the concept."

The philosophy appears similar to that employed by Nintendo. In a private interview later, we ask the producer whether this approach is something that the industry is moving away from.

"The main feature of a game, what sets it apart from any other forms of entertainment is the gameplay, the fun, the interaction between the machine and the player. We are not filmmakers, films don't do this and what we make is games. If this point is lost, if the gameplay doesn't come first, with the fun that comes with interactivity as the basis, then what we do becomes meaningless. In this sense, I think both Capcom and Nintendo are similar. I am proud to be a person who focuses on the creation of video games."

The creatures are there "just" to make for a fun and enjoyable experience. Hence the typical early creature in the game can be weak, usually fleeing, relying on its pack or calling them in. Or the beast which doesn't let you find its weakness at first sight, requiring some time for discovery.

Afterall, as Tsujimoto puts it "the more you enjoy it, the more you're going to want to play new missions" and that's the key to the success of the Monster Hunter franchise. He further emphasises that "if you don't get the player tense or anxious, then you're not doing well".

Ryozo Tsujimoto knows how to keep his audience entertained. He mixed up his presence as a master of the hunt with the talents of a game show host as he quizzed and educated those in attendance on monster sounds and the inspirations for shapes and designs.

At the end of the presentation he played recordings of monster sounds and asked from where they originated, thus there was an element of competition thrown into the educational experience. The first person to produce the correct answer was given prizes ranging from traditional Japanese wooden flip-flops to a Monster Hunter branded bag.

This part of his lecture produced the most memorable stories and biggest bursts of laughter. A member of the development team produces the screams of one of the monsters with his voice, while the "voice actor" for one of the feline creatures is Airu - a cat who belongs to the sound technician. Crocodiles, walruses, and rattlesnakes were among the animals recorded, as presented in video form.

In a round of questions and answers that concluded the session, Tsujimoto said of the design process: "The creation of some monsters took six months, but in the end we always managed it by modifying look, behaviour, etc... so that none ended up in the trash."

He also acknowledged the fact that more could be done to please European fans of the series. "I hear the concerns of Europe", referring to decisions not to include certain features in this part of the world. He apologised and promised a greater dedication to Western audiences moving forward.

However, one area European will be none too happy about is the fact that European players will only be able to play online with players from the same region. And you will not be able to share screenshots via Miiverse, representatives of Capcom confirmed at the event.

Later on speaking with Gamereactor, Capcom added that there will be comparable events and unlockables in Europe as in Japan, albeit not sporting the same collaborations.

"The voice chat in Monster Hunter 3 Ultimate takes place directly through the Wii U GamePad", said Tsujimoto, but it remains unconfirmed if you can connect a compatible headset to the GamePad as with Trine 2: Director's Cut.

"The Wii U version was created from the 3DS game, and it was created by the internal Monster Hunter team and part was outsourced. The most important team members have reamained on the project."

Finally, we asked if there are any plans to make Monster Hunter more accessible and simplify the mechanics to reach a broader player base. "We have no intention of making things easier - our goals is quite the opposite - we want to expand the options of the players when making decisions. This is how we believe we can reach a wider audience. Not by simplifying it."

Monster Hunter 3 Ultimate is set to arrive on Nintendo 3DS and Wii U on March 22. A free demo will be made available on February 22. Have a look at the game intro below:

"It's a game built more for teams of adventurers than the lone wolf, as teamwork forestalls potential grind in tackling the boss fights."

European and North American players to join forces in April.

In focus at Nintendo Direct.

ARTICLE. Written by David Caballero on the 8th of February 2013 at 17

Footage of Wii U and 3DS versions. 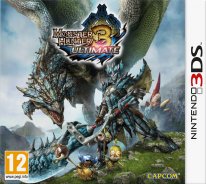