Minecraft: Story Mode - A Telltale Games Series' eighth episode has been given a release date of Tuesday September 13, being available to purchase digitally as part of the Adventure Pass or individually.

In the eighth episode entitled "A Journey's End?", Jesse and crew have a chance to return home but face challenges, tasking players with defeating a series of opponents in gladiatorial games to win freedom.

Jim Cummings of Winnie the Pooh stars as Hadrian, leader of the Old Builders, and Kari Wahlgren from Rick and Morty stars as Mevia the Enforcer.

Telltale Games will take another stab at Minecraft.

Minecraft: Story Mode episode one now free on Steam too

It's not just exclusive to the Microsoft store any more.

And the full season is now cheaper.

The Complete Adventure Disc to land later this month.

Jim Cummings and Kari Wahlgren star as we might see "A Journey's End".

Telltale is keeping up the pace. 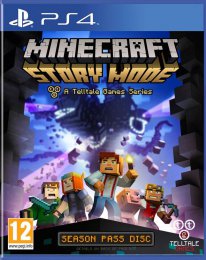