Minecraft Dungeons was a surprisingly fun co-op dungeon crawler, that has continuously been fleshed out by Mojang ever since the release in May last year. But, despite being a really popular game, it hasn't been updated for the newer consoles - until today.

Mojang has just released update 1.8.0.0 and in the fairly lengthy patch notes, we learn that it has finally been updated for Xbox Series S/X. There is no word of how PlayStation 5 will be handled yet, but as Mojang is a Microsoft studio, it's hardly surprising that they focus on Xbox first and it does not mean it won't be updated for Sony's console as well at a later point.

Here is what you have to look forward to when adventuring in Minecraft Dungeons for Xbox Series S and X starting today:

They also add that they are "releasing a free cape and pet as part of this update" to celebrate that the game reached 10 million players earlier this month. The expansion Flames of the Nether is also launching today, so there are plenty of new content to discover and Achievements/Trophies to fetch for all digital adventurers out there. 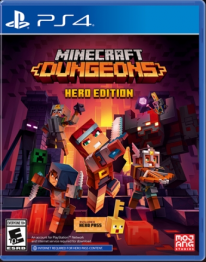