When the Switch port of Miitopia was first revealed, I found myself feeling pretty perplexed. It seemed to be a strange selection given that it didn't generate much excitement at launch and reviews from critics were pretty lukewarm. Additionally, there's an entire catalogue of great games on the 3DS that I would have expected to see land on the Switch beforehand.
Still, I was pleased to see that a title released so late into the 3DS' lifecycle was getting another shot at glory, and I was keen to see whether I had missed out back in 2017.

Miitopia's story is a pretty horrific one given its supposed child-friendly nature. An evil entity known as the Dark Lord is plotting to rise up an army of monsters by stealing people's faces and it's up to you to put a stop to his sinister plans. The story itself might not be the most imaginative, but Miitopia sets itself apart from other RPGs, as you can customise the appearance of everyone you meet including your allies, NPCs, and the Dark Lord himself.

You can decide the look of these characters either using the Mii character creator or by selecting from a catalogue of thousands of designs that the community has created. The creation tools are really in-depth and I was surprised to see how identical some of the user-created Mii's looked compared to the characters they were based on from popular culture. Having the likes of Squidward, Donald Trump, and Diddy Kong all running around within my game and watching them interact with each other was hilarious, and I certainly felt more engaged in the story when seeing this strange ensemble of characters together.

When it comes to combat, Miitopia might just be the easiest RPG that I have ever played. During its turn-based battles, you only need to control your main character and the rest of your team act on auto-pilot and move completely independently. There are also no elemental resistances you need to be aware of when using magic attacks (this is something that even Pokemon has and its combat has been continuously accused of being shallow). I remember using a lightning spell on an enemy shaped like a storm cloud and being surprised that my attack had the same amount of impact as it had on any other random foe.

Exploration is another main pillar of Miitopia's gameplay, as you need to make your way across a branching map to reach each new story objective. I found these stretches to be the most dull part of the game, however. When walking across the map, your characters move completely on auto-pilot and they spout the same few boring lines of dialogue like how they wish they had "kitty cuddles." There are a few randomised elements scattered throughout like multiple pathways and treasure chests for you to open, but even these feel repetitive given how frequently you need to experience these sections when moving between areas.

A significant portion of gameplay also takes place within inns that you will rest at when moving between areas. Here you can build the relationships between your characters by having them stay together in the same room and taking them out together on activities. Strengthening the relationship between two characters enables them to better assist each other in combat, as they can learn abilities to shield each other and spur each other on. Conversely, if a relationship between two characters sours then they will hilariously break out into fist fights occasionally during combat and inflict damage upon each other.

As well as caring for the relationships between your Miis, you'll also need to feed them to bolster their stats and purchase them new class-specific gear with the gold you've obtained. You are only able to feed your Mii a handful of meals in between areas and each of these boost different stats such as their defence, attack, and speed. You need to be strategic when offering out these meals, as you'll want to ensure that your team is evenly balanced in their abilities. You also need to be wary of what foods your Mii likes and dislikes. If a Mii likes a meal then it will grant an additional boost and if they dislike it then they won't get the full benefit.

Along with the obvious changes like being able to play the game on your TV and it now being in HD, a few new additions have also been added to the Nintendo Switch port. The character creation system has been expanded upon with more wigs and makeup options and a new horse companion has been added. This horse companion is a fun new addition, as its appearance can be customised and you can mount it during combat to perform some abilities that weren't present within the original. Admittedly, the differences between the two versions are pretty miniscule and I doubt that they would be enough to encourage many players to purchase the game for a second time.

Even though its Switch port might be barren of many meaningful new additions, I would still recommend Miitopia for younger audiences and those who are new to the RPG genre. Its combat isn't punishing and is simple to grasp and there's so much fun to be had when customising every Mii that will star within your adventure. That said, the exploration aspects significantly bog down the experience and more seasoned players might find it frustrating that you don't have the freedom to command your entire party.

Gamereactor UK
+
Being able to customise all NPCs is hilarious, it's a great introduction to the genre.
-
Exploration sections are tedious, most of the combat is played on auto-pilot, there aren't too many new additions in the Switch port.
is our network score. What's yours? The network score is the average of every country's score 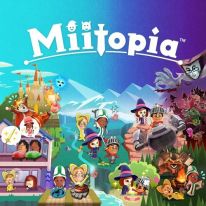