Comcept, the studio of Keiji Inafune, is working hard on Mighty No. 9. The game was succesfully funded with Kickstarter and raised more than $3.8 million. Development is moving ahead and the game is supposed to be published in the spring of next year. To make the game even better, Comcept decided to offer an additional funding campaign via Paypal and offer new stretch goals.

The reason for this new campaign is said to be an offer for everyone who was late for the official campaign last year and Comcept wanted to include bonus content to Mighty No. 9. On the official page, the developers states: "Any new funding will not go towards existing content in the current state of the game, but bonus content to be implemented into the title."

First stretch goal is full English voice acting for 100.000 Dollars. Next goals will be revealed while the campaign is running. Part of the money, Comcept wants to collect comes from pre-orders via Humble Bundle - not for the game itself, just the money paid for the digital extras is raising money for new campaign at the moment. More details can be found on the official website.

Secondary crowdfunding campaigns has a tendency to be criticised, and this announcement has been getting some negative responses.

Did someone just get burned by the blue hedgehog?

Mighty No. 9's launch trailer brings back the "cool" narrator

Turns out it isn't just Deep Silver who likes him.

New Mighty No. 9 trailer shows off your abilities

Dash, combo move and absorption boost your way through the levels.

Delayed a bit longer, but at least for the last time.

Mighty No. 9 delayed once again 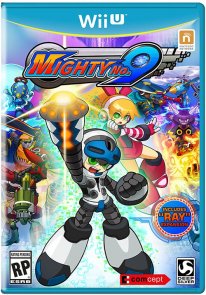