Keiji Inafune's Comcept and Mighty No. 9 was one of the big Kickstarter winners in 2013 and as the last thing of 2013 they held a vote among backers to decide the design of the female heroine of the game.

Call F by Yuuji Natsume of developer Inti Creates won by a slim margin at the end of the vote.

Did someone just get burned by the blue hedgehog?

Mighty No. 9's launch trailer brings back the "cool" narrator

Turns out it isn't just Deep Silver who likes him.

New Mighty No. 9 trailer shows off your abilities

Dash, combo move and absorption boost your way through the levels.

Delayed a bit longer, but at least for the last time.

Mighty No. 9 delayed once again 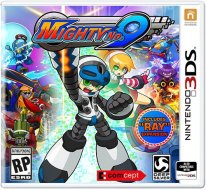