It's rare to find the word ‘ambition' associated with a licensed tie-in title, but it's certainly something that springs to mind upon seeing the latest build of Middle-earth: Shadow of Mordor.

It's a marked change from our original opinion. The game's inspirations were reportedly many and obvious, and even with initial buzz being positive at the game's reveal event from those that saw the game in action, we remained unconvinced. Turns out seeing is believing.

The latest preview version, shown at Gamescom last month, comprised of two parts. The first follows Talion - recently resurrected Ranger with the spook responsible for his return to life now co-inhabiting his head - on the trail of Gollum in a story mission. The second glimpse further demos the Nemesis system, the high-concept mechanic that has enemy Orcs levelling up as you do, in order to create distinctive foes and unique mini-bosses.

Both gameplay demos prove to be solid, entertaining. The latter, detailing how the Orc hierarchy works and how it impacts your game,
is ambitious. To the extent that when we talk to Monolith post-presentation, there's discussion about how every studio creating a sandbox adventure in future needs to incorporate such a mechanic. If it does what it promises, Nemesis could be a genuine genre changer.

But let's go chronologically. The opening demo has Talion tracking Gollum through forests and ruins and into a troll (technically a Graug) cave deep in the heart of Mordor. Fear of the game's fixation with Sauron's domain meaning a constant trudge through mud and dirt dissipates as we gaze on greenery and rolling hills, dotted through with destroyed structures and Orc strongholds. Seems like there's more to Mordor than the destitute mud pit we glimpsed during the climatic scenes of The Return of the King.

Likewise, there's yet more backstory to Gollum. New-gen visuals mean the emaciated creature looks closer to his cinematic counterpart, and excellent voice work by Liam O'Brien means it's hard to distinguish his take from Andy Serkis'. Talion's tracking down of Gollum suggests that the one-time ring-bearer's presence in the game will be more than mere cameo, as the two converse as if already well-acquainted. There's also a third perspective, as the Wraith inhabiting Talion's body and giving him his powers is revealed as Celebrimbor, the elf blacksmith who originally forged the Rings of Power. Through him we get flashbacks to their creation, and get to see Sauron sans armour as the two interact during the crafting of the rings.

The present day situation between the three - Ranger, Wraith and Sméagol - tread in the same story footsteps as Sam, Frodo and Gollum's interactions in LOTR, something that's consciously echoed rather than being an accidental, and poor, facsimile of the original. At the very least, it suggests substance and bickering differences to a three-way relationship that'll add narrative depth to an otherwise shallow supernatural ranger carving his way through Orc armies.

And chop and cut is what we see Talion do for most of the presentation. There's an upgrade system in play that demos new moves first to allow you best decide what's worth unlocking. Today's choice grants Talion an attack teleport ability. Aim at a target and release to see Talion teleport onto the distant enemy and deliver a fatal blow.

A trick used to jump between groups on the battlefield, but also to quickly jump between inaccessible spots - like high cliff ledges when trying to escape out of a collapsing cavern, and the arms of the rampaging troll that's causing the landslide. Also proving crucial to tracking Gollum is a tracking ability, which allows you to see Gollum's trail more clearly. Important when the footprints disappear as the creature skitters up vertical surfaces.

While once in the cave you're funnelled in a particular direction, there is a sense that your path isn't so controlled. Side corridors plunge into the darkness, suggesting exploration is needed. Reach outside, and the surrounding area sprawls out in every direction. A chance to sate that wanderlust, and going off-mission is heavily emphasised by way of the Nemesis system.

Orcs grow with experience, the world (and your interaction with them) shaping their strengths and weaknesses. One could grow incensed by the appearance of Wargs, while another Orc may be fearful of them and run in the opposite direction. You can check each Orc's developing personality through a separate sub-menu, where you'll find the key characters of the region displayed and detailed.

Even if you're not in the vicinity to poke them with a sword, they'll continue to evolve. There's almost a turned-based element to spectating in this menu, as personalities clash with each other over time, murdered Orcs being replaced by new lieutenants, and survivors vying for the position of war chief.

When they earn that stripe, they become a mini-boss on the map of Mordor, and an optional objective to your main quest. They'll need to be taunted enough to emerge from their hideout; they won't be found wandering the world for a quick backstab, so the game creates a random selection of objectives to meet in order to call them out.

These are dictated by their personalities. The one we see during the demo is a timed mission to kill 20 Orcs in under two minutes, in order to enrage their leader enough to attack you personally. As the Orcs under his banner are spread out across this particular stronghold, that attack teleport becomes essential in making the deadline. No simple hacking at the attack button here, as is exampled by the developer dying at the hands of the war chief.

There's a groan from his fellow staff member at the unexpected death, but it does allow Monolith to illustrate an important point. Time won't reset on death. You'll backtrack to the last checkpoint, but time doesn't rewind with you. You'll resurrect some time later, and the Orc that killed you will have ranked up to become a tougher enemy next time.

It's counter to the modern idea of simplifying a particular juncture of a game in order to allow every player to proceed. Though we're unconvinced that this will translate to a harder boss fight next time (the learning curve could easily become vertical), it's a nice idea and hopefully means each battle, however many times repeated, will feel different from the last.

It's an interesting two-parter of a demo. The game looks slick in motion, and better than static screens would lead you - and us - to previously believe. We could have a solid, entertaining adventure title on our hands, that benefits - for Tolkien fans at least - from the overlay of a familiar world and cast of characters. A licensed title that could be one of this autumn's most anticipated titles? That's definitely an ambitious idea. 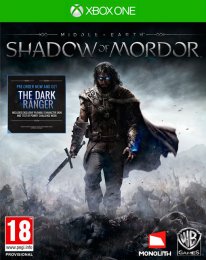