We really appreciate how incredibly smooth it is to move between Xbox One and Xbox Series S/X in games that supports Smart Delivery as you really don't have to do anything. Just play your games using the same save file regardless of format. But the messaging hasn't been on point, to put it mildly.

The physical Xbox covers for Xbox One and Xbox Series S/X has way to much information to the point that it makes it harder to understand what it all means and feels cluttered. Fortunately, this is about to change. Several stores have added Microsoft Flight Simulator and Forza Horizon 5 for Xbox Series S/X for pre-order, and at the same time revealed a new series of covers. Take a look below at this more stylish and minimalistic design.

Helicopters are coming to Microsoft Flight Simulator in 2022

Multi-screen and DirectX12 support is also in the cards.

It will be taking off on Xbox Series on July 27.

The update launches the same days as the game's Xbox Series debut.

They should make it easier to understand the platforms for Xbox games.

The sim will be coming to Xbox Series on July 27.

Is Microsoft Flight Simulator for Xbox launching on Tuesday?

The release date could potentially be revealed during Xbox & Bethesda's E3 showcase. 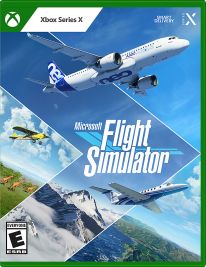