Samus Aran has been called to complete a mission. What started in Metroid cannot be left unfinished. Almost 26 years have passed since we found out what the mission was about in Metroid II: Return of Samus, the game that led to the blossoming of a vast universe that has given birth to sequels and spin-offs that are among the best their respective genres has to offer.

The story is the same, but the way it is presented reflects how much technology has improved in 26 years. Mercury Steam, the Spanish studio entrusted with bringing this new version to life working under the guidance of Yoshio Sakamoto, has used static images with a strong 3D effect to draw the player into the script, to set the mood. The introduction is brief and not very incisive, so as not to scare away those who don't know much about the franchise and just want have fun and enjoy the game's platforming and action.

It's an statement that becomes obvious just a couple of minutes later, when we see the first image running in the game's real engine: the ship lands and Samus comes out. Metroid: Samus Returns is a game with 2D movement and a polygonal base that shows stunning depth in its environments, at least during those few seconds before we bury ourselves underground and start digging through the corridors, alleys and rooms ahead.

The trailer revealed at the E3 showcased the melee counterattack system, an essential element to the game. The new enemies charge at the bounty hunter as soon as they notice her, but a timely button press allows Samus to cause critical damage. The 360º aiming system, which can be activated by holding the left shoulder button, is just as important. This system shows that the levels are no longer made up of scaled blocks, they now form a continuum that requires more precision. Just a few steps ahead, we find a Chozo ruin containing orb that happens to be the Morph Ball.

We kill a few more enemies to keep practising shooting and counterattacking, as well as getting to grips with Samus' movements. She's agile and fast, but much slower while crouching, particularly compared to previous entries. When we reach the orb that activates the X-Ray Scope, we get a taste of how the map can be changed to take advantage of our character's abilities, albeit in a very simple way. The newly acquired ability will be one of our best allies through our adventure, as it will keep us from getting stuck by showing which surfaces can be broken to reveal the main path or secret locations hiding missile and energy tanks.

Character upgrades appear unbelievably fast during the first few minutes of play. The Charge Beam can be found just a few meters away from the X-Ray Scope. For the time being, we won't use it much in combat, but mostly for solving puzzles involving doors that can be opened using different types of equipment. Then we go up a bit, break something, get into a ball, come back from behind... even if it tries to mix things up, the map in Metroid: Samus Returns is linear and predictable so far. A few save stations and the first teleport station point the way, and between the X-Ray Scope and the map, that lets us leave notes using a colour code, progress is a piece of cake.

Ten minutes ago, we passed by a ruin where we saw ten circles placed in order. We could see one of them lighting up via a quick and brief transition to in-game video, which means that we needed a sample of metroid DNA to activate it. Thanks to our new abilities and the beeps coming from the sensor on the touch screen, we manage to find the creature easily. As expected, we head into battle, but instead of a close quarters combat, we have more of ranged affair as it jumps at us from a distance. We must counterattack and blow it to bits with our missiles. The battle is short and easy, but provides us with a nice show.

This is the moment when Metroid: Samus Returns really begins. Putting enough genome into the ruin activates it and triggers a change in the world. In this case, poisonous liquid disappears and opens a route to the deepest areas of the map. We now enter Area 1. Everything we've seen before was simply a slyly hidden tutorial in a simple level designed to help us learn and have fun at the same time.

When we go down a little, rocks start to crumble. The corridors we saw before are now rooms connected at different levels by doors, tunnels and blocks that you can break either now or later. We get stuck for the first time because we miss a few soft blocks under our feet, even with the help of the X-Ray Scope. We also start leaving some paths behind, even though we're not sure when or how we'll come back to them, so we place a note on the map. Some of them are obviously (or maybe not) meant to be explored using the Morph Ball's bombs, so we'll probably find this ability somewhere near.

Funnily enough, the Morph Ball bomb is not the first ability we find. Instead, we bump into another ruin where four circles lighten up, meaning that we need to hunt four metroids this time if we want to exit this area. To make things more difficult, the path branches off radically just few steps ahead, near a teleport station: on one side, we have water we can walk through; on the other, a tower with several exits. The x-ray scope allows us to see several blocks in advance and the map is very efficient at showing what kind of blockage is preventing us from accessing each place or where the points of interest and secrets are located.

The inner depth of this cavern is filled with a varied and rich world. Just by changing tunnels, we discover a completely new setting, a different type of enemy or, at least, a monster with some new ability. We can see heat gushing out through a door, so it's not even possible to get close to it. Another door gives way to a scenery cover in lush vegetation. It's a mystery how all that flora managed to grow there. There isn't a single room without a combat waiting for us and there's no guarantee that we'll get out of them alive, even if we carry an energy tank. Our enemies' attacks, as simple as they may be, cause great harm now that we lack armour. Getting cornered by three or four of them may lead to an untimely death. Still, the combat system remains in the background, allowing exploration to take centre stage. The Ice Beam opens up new routes because it lets us use the enemies as platforms.

The Ice Beam will surely come in handy, but the next orb we picked up from the ground, after it fell from the hands that held it, is even more useful. In comparison with other entries, the Spider Ball is obtained very early here. As far as we've been able to assert, there are no limits to this movement: it allows us to go through the whole map from wall to wall, even through the ceiling, so we opt to spend a bit of time exploring certain areas before heading to two rooms where a couple of creatures are waiting for us. By using it continuously, we notice a somewhat unpolished control design decision. It happens whenever we're using the Morph Ball and moving. Since we only need to press down one more time when crouching to turn into a ball, sometimes you get to that position involuntarily, like when you're trying to shoot while on your knees, for example.

This enemy is basically an electrically charged version of the first Metroid, the difference being that we can't always counter its attacks. On top of that, its movement timing has changed, so it's easy to miss the first few times we try to hit it using our previous experience. We died twice because we tried to finish it off quickly, which means that patience plays an essential role here.

We left this one behind on the opposite side of the map, since we lacked the abilities needed to access the area. Coming back there is not just a journey, but an acid test for level design. A good Metroid must allow backtracking without slowing down your progression, and we can confirm that MercurySteam have passed the test, as moving throw the rooms in Area 1 is easy enough. We're even a bit alarmed by how close everything seems to be when we run at full speed from one side to the other.

With two Metroids in the bag, our time with the game has almost come to an end. After all, a desperate search rarely finishes with a desired outcome. We have to open the map, check which places we've visited already and which ones we've left behind and plan alternative routes. In fact, we haven't even explored 50% of this area. Advancing so fast and the number of abilities we got in so little time triggered alarm bells about the potential length of Metroid: Samus Returns, but all of our concerns were cleared when we found a much complex area a bit later on. We saw three Metroids, but there are more than 30 of them, so it seems that we have a long journey ahead. Now, we only need to wait another five more weeks to play it, preferably on a 3D enabled 3DS.

REVIEW. Written by David Caballero on the 12th of September 2017 at 13

"It's a truly enjoyable and thoroughbred Metroid, and the 3D re-imagining allowed the designers to create much richer environments."

There are no plans for another Metroid remake

But Yoshi Sakamoto says that could change.

We lay out all the contents.

Metroid: Samus Returns "is pleasing everyone"

We spoke to Mercury Steam's Enric Álvarez about the game's origins.

It's not yet announced in Europe, though.

PREVIEW. Written by Sergio Figueroa on the 8th of August 2017 at 13

As surprised as we were by its announcement, we're even more surprised after having played it for 90 minutes.

MercurySteam's reimagining is only a month and a half away. 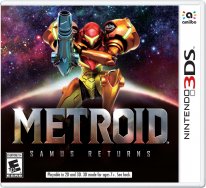