The <a href="http://www.gamereactor.eu/news/452153/Blizzard+tops+the+UK+retail+charts%2C+but+with+which+game/>latest GfK/Chart-Track charts for last week</a> revealed that Metroid Prime: Federation Force had a poor launch in terms of sales, entering at number 15 in the 3DS charts.

Federation Force was nowhere to be seen on the all-format top 40, and to not crack at least the top 10 for 3DS surely comes as a blow for Nintendo even considering its frosty reception prior to release. Many games that are years old have charted above Federation Force, so although we don't have sales figures as such it can only be assumed the sales performance was abysmal.

Spoilerific tease drops after the credits.

Check out some cooperative 3DS action.

Check out the divisive 3DS exclusive.

Do the criticisms from its unveiling still stand when playing the actual game? 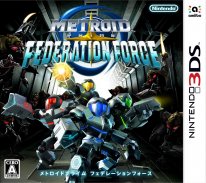