HD remasters are common enough today as to not raise much beyond an eyebrow for those other than fans wanting to upgrade their favourite titles onto new-gen consoles (or stop worrying about losing space to older machines just to play their treasured franchises), but Metro's take is somewhat interesting.

We'd been aware of Metro Redux - a combo pack of the two existing games in the series, 2033 and Last Light - for a while. The work going into the release however, mightn't be so well known. Publisher Deep Silver revealed that extent, which is effectively a remaster of both titles, at a pre-E3 event this week.

Handled by original creator 4A over the course of a year (whilst the studio was in pre-production for their new, yet unnamed game), Metro Redux is their testing ground for getting to grips with the new-gen architecture (the package is due out both in digital and physical form on PS4, Xbox One and PC, the last offering a 50% discount on the new games for owners of the originals), introduce a massive graphical overhaul of Metro 2033, tweak gameplay in both, and bleed gameplay mechanics from one to the other. 2033's emphasis on survival horror now lurks in Last Light's Survival mode, while the latest game's focus on action gets a nod in 2033's Spartan setting. Both modes exist in both games, and both titles also get the Ranger difficulty setting offered - stripping away HUD elements and further limiting supplies.

2033 offers the most extensive changes, with only the geometry of the original used in the rebuild: shadows, lighting, models are all new. Your hand now appears in shot to crank levers, press buttons. AI is altered, gameplay beats slightly adjusted, even extended in places. Not extensively, but enough to make you unsure of what's next. Mask wipe and filter timers, along with other HUD and gameplay elements from Last Light, are retroactively fitted in to make the two a more clearer continuation of each other.

Last Light's changes are more behind the scenes, 4A emphasising the customisable gameplay perimeters to give even previous players a reason to try a different take on it. As has already been confirmed by the company, the game will run at 60fps on both consoles, 1080p on PS4, and around 900p on Xbox One.

Both Metro games did reasonably well critically on they respective releases, but there's a sense the series has slipped quickly beneath the radar since. With the deeper modifications beyond even an HD upgrade, the fact that the pack is coming out in summer - a time when the industry's release schedule is quieter than a grave - and each game with be around £15.99 digitally, 30 quid or so for both at retail, post-apocalyptic Russia may have found its moment to shine.

Offline
managa on the 1st of June 2014 at 12:06.
graphics are amazing to me how good it looks on other games.
http://www.frivfrivfriv.us/

Offline
Scorp on the 6th of August 2014 at 11:33.
I got metro lastlight on steam and am simply not going to pay for the same game again.

Same story same maps only different "game engine" not ever close to buying it with the 50% off. 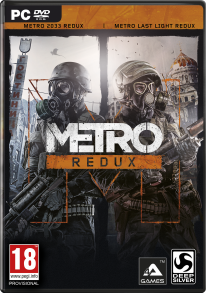