Before pioneering an action RPG genre of its own with the launch of Demon's Souls in 2008, From Software devoted its time to perfecting the mech shooter. The Armoured Core series was its most prolific property, but an entry that managed to build a strong cult following over the years despite having the setback of only being released in Japan was Metal Wolf Chaos. This was largely in part to its 'so bad it's good' storyline and voice acting along with its explosive and fast-paced style of action. 15 years after its initial release, From Software has teamed up with Devolver Digital to finally bring Metal Wolf Chaos to western audiences and it has now arrived with refined visuals and support for English menus and subtitles.

Metal Wolf Chaos XD does the impossible right out of the gate as it manages to make politics action-packed and engaging. Vice President Richard Hawk has tossed you out of the white house and has left the nation in tatters after spearheading a coup d'etat. It's up to you 47th President Micheal Wilson to win back the freedom of your country the only way you know how - by causing widespread destruction with a heavily armed mech suit. The plot is stuffed with absurd humour and we loved the bad B-movie-esque voice acting and the awkward but hilarious romantic tension between the president and his assistant, Jenny.

After a brief standoff at the white house, you then make an eastward journey across the United States making quite the road trip across icon locales such as the Grand Canyon, Alcatraz Island, and Las Vegas. Your objective across the 14 missions is to diminish the military control in each area by destroying control areas, defeating bosses, and freeing hostages. This is pretty much the cornerstone of each mission but this formula is occasionally altered as in Chicago, for example, we had to remove the presence of troops before a toxic cloud of gas swept into the city and poisoned its residents.

The action here is just some good old mindless fun and we felt unstoppable as we dowsed troops with flames, ground pounded tanks into the pavement and sent helicopters hurtling out of the sky with a barrage of missiles. You can equip your mech with up to 100 weapon combinations and these include missile launchers, shotguns, flamethrowers, and railguns. You can fire two weapons at once and have up to eight with you at one time to toggle between by simply pushing down the circle button (on PS4). The weapon variety here we felt help to remedy the repetitive mission structure as it meant that our path to destruction was always forged in fun new ways as we experimented with different combinations.

Your victory on the battlefield is rewarded with money and tech which can be exchanged for a variety of different weapon variants. Shotguns and sniper rifles, for example, can be invested in for up to eight levels with each unlocking new guns with their own stat profiles. There's no one gun that does it all within each category and you'll need to constantly experiment and weigh up the pros and cons of your arsenal to deal with the ramping threat that stands before you. One shotgun that you craft may pack a punch but it may lack the capacity to carry much ammunition, for example, and similarly, a missile launcher you equip may have a sweeping range but may not cause that much damage on impact.

Metal Wolf Chaos does admittedly fumble in a handful of places. For one there isn't a traditional checkpoint system and if you die during a mission you are forced to start right from the beginning. With missions taking up to 30 minutes at the most, this isn't a deal-breaker, but it's something that we had to get accustomed to given the design of more recent games. It's also a bit on the short side with its 14 missions only taking around six or seven hours to complete and there's no real incentive to make a return besides getting a higher score or finding the hostages and energy pods that you may have initially overlooked.

The remaster has smoothed off the edges of this Xbox original offering 4K resolution, widescreen support, and improved textures and lighting. It still has an archaic look to its visuals, which is in part to its very linear and desolate stages, but the differences are night and day if you are to compare the original and the remastered version side by side. It also features English subtitles for the first time which is a blessing because often the dialogue is drowned out by the rumbling of rocket fire and loud crashes of explosions. The balance between the in-game audio and the dialogue is something we certainly wish would have been paid more attention to when things were given a second look.

Offering fans a gaze into From Software's antics pre-Dark Souls, Metal Wolf Chaos XD is an explosive old-school mech shooter that packs plenty of humour within its absurd plot and offers heaps of weapon customisation capabilities. Its missions do revolve around the same objectives though and it is rather on the short side with just 14 missions to shoot, ground pound and rocket propel yourself through. Still, this is a solid remaster and we imagine that it will be eagerly anticipated by many especially as there seems to be a shortage of this brand of mech shooters on modern-day platforms.

Advertisements
Gamereactor UK
+
There's plenty of weapon variety, combat is explosive and fun, the campy plot is worthy of more than a couple of laughs.
-
Missions are repetitive, it's a little on the short side, it hasn't aged too gracefully in a number of places.
is our network score. What's yours? The network score is the average of every country's score

"An explosive old-school mech shooter that packs plenty of humour within its absurd plot and offers heaps of weapon customisation capabilities."

Metal Wolf Chaos XD is up on today's stream

The 2004 FromSoftware classic is back, and we're gearing up to try the mech shooter out on our stream today. 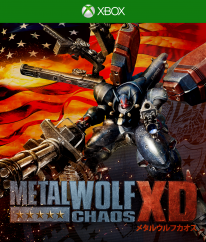