"From vampires to Raiders; how we learned to love the bad guys."

At Gamelab 2016, studio head Enric Álvarez and producer Dave Cox offered the first ever gameplay demonstration of Mercury Steam's brand new IP (and following on from the Castlevania: Lords of Shadow series). The independent sci-fi multiplayer adventure, Raiders of the Broken Planet, was shown off for one hour, and we got to see game features and some live online multiplayer action. Check it out below.

"It's intense, it's stressful, and you feel like you're really in trouble."

The Danish company, part of Nordisk Film/Egmont, has officially completed its addition as a major shareholder to MercurySteam.

The Space Shop grants access to new skins and emotes, and the update brings plenty more like monthly rewards and Featured Player highlights.

It's now a free-to-play game too.

Download Raiders of the Broken Planet in full for free

The three available campaigns so far are yours to keep at no cost.

Raiders of the Broken Planet - Hades Betrayal out now

The 4v1 shooter also gets a new progression system.

Today on GR Live: Raiders of the Broken Planet

It's time for some Wardog Fury. 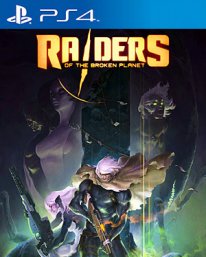