Here we go again. A bunch of robots are running wild, which has something to do with the robot virus Roboenza. Dr. Wily is supposed to be innocent this time, Capcom tells us, but wise from experience I know that the last boss will be the good old doctor anyway. Sheep Man, Commando Man, Blade Man, Strike One, Solar One, Chill Man, Nitro Man and Pump It stare at me from the screen that let me choose which of them I'll start out with, before I pick Sheep Man and another Mega Man adventure begins.

After Mega Man 2 (one of the best games ever) the 2008 hit Mega Man 9 is probably my favorite in the classic series. Capcom went back to its roots, not only because it was retro-cool, but because Mega Man thrives in glorious 8-bit. The controls will never be that wonderfully precise if the levels aren't rendered with such clarity.

Pixels are art, and it was great to hear Capcom's composers working within the constraints put on them by the NES sound chip again. If I had any complaints about the design last time, it would probably be that the levels were a bit colorless. The game was very black, which isn't Mega Man to me.

The first thing that hits me when I start up Mega Man 10 is that the latter problem seems to be fixed. Now the levels are as wonderfully colorful as they should be with plenty of proper backdrops. Sheep Man's level turns out to be full of electricity and a joy to dance my way through before I finally meet up with a really cool boss and conquer Thunder Wool. I know that electricity is good against water bosses so I go for Pump It next.

You know what you get when you buy Mega Man 10. A clever platform game with so much action that I almost faint. The levels need to be studied in order to have even have a chance to survive and for those who are not used to this kind of game it is almost maddeningly difficult. But I think that the difficulty of Mega Man 10 is a bit nicer than in the ninth game, except for a few really tricky passages.

Mainly because it doesn't really have the same sense of finesse. While the level design has received a graphical boost, the levels themselves don't seem as thought through. There are some really annoying spikes placed around the levels and in many places it just feels evil and not at all like the hard justice that has become the series' hallmark. There's not as many good songs that get stuck in your head as there were in Mega Man 9 either.

Most importantly, the weapons are not as fun to use. Half the fun of Mega Man 2 was that you could use Flash Man's weapon to stop time where it was needed or use Metal Man's versatile gun. Here I get the feeling that each weapon is designed to kill a boss according to some "rock, paper, scissors"-approach. No weapon is a given replacement to Mega Man's own gun, which feels a bit sad.

Now I'm just complaining, but then Mega Man 10 belongs to one of the best game series ever and Mega Man 2 is one of the best games in the world, ever. We're talking a pretty high standard here. But Mega Man 10 will not disappoint any true Mega Man-fan. It is filled to the brim with that lovely retro-playability and the impeccable game control is still hard to beat.

It should be noted that you can play through the whole game as Proto Man, and that Capcom has added an addictive game mode called Challenge mode; 88 challenges that entertained me for hours. Finally, there is now an easier difficulty setting for anyone who thinks that Mega Man is too hard, which I know is eagerly awaited in some quarters (even though I politely but firmly claim that Mega Man should be enjoyed on higher difficulty).

As I said, you know what you get in Mega Man 10. This is not one of the best games in the series, but hardly not one of the worst (that award goes to Mega Man 4 and 7) but a bit of an in-between. Which actually is quite enough for me, and anyone who does not shy away from a real challenge, loves retro games, or just loves Capcom's robot boy should definitely take a closer look at Mega Man 10.

Capcom's blue mascot is back in a new pixelated platformer. But can he still jump his way into our hearts after 23 years?

Mega Man through the eyes of a warped mind.

Our favorite blue hero is back

The little man in blue returns...

Coming to all formats in March 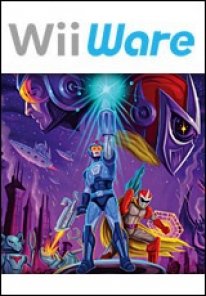