Truth be told, I didn't get on with Mass Effect at first.

There's some games you feel the impact of, even if they don't click personally. It was that way with the original Mass Effect. The chatter about the game, and this new universe that was being mapped out amongst friends and on forums could fill books. Even if I couldn't get on with it, I knew something important had landed. I've only seen that level - and length - of discussion with the The Elder Scrolls titles.

I tried on three separate occasions to partake in the inaugural mission of Commander Shepard. I appreciated the achievement of creating a wholly new sci-fi universe, but struggled with my interactions with it. Namely the combat and the cover mechanics - fiddly enough to drive me to distraction and put the pad down.

That was reason enough to hobble two of my attempts. Third - second in chronological order - was a piss-poor tackle of the custom character system. It only took a handful of cut-scenes, eye to eye with my creation, to make me lose any faith that a chinless, fish-eyed redneck could conceivably be the saviour of humanity. As result I became staunch believer in sticking to developer character defaults.

Even with my inability to crack the original, I picked up Mass Effect 2 during sales season. If it wasn't for the job, and the need to cover the build up to Mass Effect 3, it may have remained wrapped and buried in the ever-growing pile of titles I really needed to play but never find the time to.

I'm fully glad I did. The focus on a small, eclectic crew and tightened combat mechanics gave me entry into a universe that was as deep and as dynamic you'd want a RPG to be, but with a maturity to the characters and their relationships that was engrossing.

There was an honesty, and conflict, of opinions board the Normandy, using the wider themes explored across the trilogy as discussion and friction points. The space vessel that I called home for sixty hours was a mix of broken dreams and disparate souls seeking some common purpose - and sometimes not succeeding.

It's RPG convention that conversations will change after each seismic event. Yet the game's the first in the genre since the late 90s that I wore grooves into the ship's walkways listening in on my crew's opinions on the latest subject.

And while the introduction of Mass Effect 2's personal missions were too obviously signposted, clunky even, and they couldn't hide the fact that something would be gained from earning each shipmate's loyalty, it meant more time getting under the skin of these ever-fascinating characters.

What did surprise was the volatile relationships that'd explode at certain points, leading you to answer what you felt was right in your gut. That was the brilliance of the series; it was impossible to play the long-game with choices, because your emotional investment focused you on the here and now. Reloads were a betrayal. You lived with your consequences.

Much has been said already about Mass Effect 3's ending. But for me the real conclusion was multifold - as each relationship drew naturally to a close, and if you'd damned your friends by your choices, it hurt.

STAND-OUT MOMENT: "Someone else would have gotten it wrong." | Mass Effect 3

It still brings a lump to my throat just typing but. But Mordin's final scene and conversation in Mass Effect 3. Something that brought together heartache, a resolution to a moral conundrum... and Gilbert & Sullivan.

Afterwards, I watched the different permutations of this one scene on YouTube. The sadness or anger injected into the same lines, played out so differently dependant on your choices, was fantastic.

It was about two hours in when the penny dropped. Something clicked into place in my head. This was the game I'd been waiting for.

Many an afternoon's study had been abandoned in favour of playing Knights of the Old Republic back during my more studious days. Whilst Obsidian's sequel was certainly playable, it didn't scratch the same itch as the Bioware original. Two hours into Mass Effect and a moment of clarity: this was the game that I'd been waiting for all those years. Bioware was back. This was my new Knights of the Old Republic. Only better.

I savoured the first. Three times through the campaign. Good Shepard. Bad Shepard. FemShep. The second and third games were enjoyed just as much, if not more, but neither prompted the same level of replay. The third trip through Mass Effect's scene-setting inaugural campaign saw a character emerge, my Shepard. The same character that would go on to feature in the rest of my telling of the Bioware trilogy.

My Shepard. That's my defining memory of the Mass Effect series. The continuity between three epic adventures, the characters I met along the way, the places I visited/gate-crashed, the enemies I made, the story I experienced.

Enduring characters and actions of consequence. My evolving crew, always asking me to make decisions that mattered. Relationships. Friends made and friends lost. Choices taken in the first chapter that would go on to impact options in the third. Epic stuff.

The depth of the lore was captivating, and this formed the bedrock on which the continuity was built. Species that we met during early encounters would go on to become both friend and foe in later meetings. For completionists there were tangible rewards for leaving no stone unturned, and for the rest of us, missing dialogue options reminding us of the mistakes once made, or new characters appearing in the place of fallen comrades.

My Shepard was tough. Fair, but uncompromising, and prone to the occasional flare of temper. Very much a fusion of the first two runs at the original campaign, the character of my Shepard was clearly defined from the outset, and that definition would go on to inform decisions made from those early beginnings, through to the exciting conclusion at the end of Mass Effect 3. It made for a cohesive experience unlike any other. It was my story.

The second and third games certainly improved things. Streamlining here and expanding there. But for me, the beauty of Mass Effect rests in the reoccurring details, and the scale with which Bioware approached delivering them. My story was almost certainly nothing like yours, and though we may have ended at the same destination, the view during each of our respective journeys was entirely different.

A lot of really heavy stuff goes down in Virmire, including a moral conundrum featuring Wrex, and a life and death decision involving Kaiden and Ashley. Punctuating all that action and consequence were dramatic Salarian speechs, an epic battle with Saren and an unforgettable conversation with a Reaper. So much happened on Virmire that would impact later events, and that's why it's my stand-out moment from the series.

I first came in contact with Mass Effect back at X05 in Amsterdam prior to the Xbox 360 launch, where Casey Hudson and Greg Zeschuck presented their vision for a Mass Effect trilogy. Their ambitious words had me excited, and looking back I have to say the trilogy delivered.

The start of the first game was slow and a bit sluggish, and the characters that first made up your party were not among the more memorable of the series. It wasn't until I set foot on the Citadel that my appreciation for the universe Bioware had built kicked in. I still feel the certain races like the Elcor, the Hanar, and the Volos were underused through the series as a whole with Bioware opting for more humanoid companions, but when you first met these wonderfully imaginative beings on board the Citadel it was a revelation. In some ways it was reminiscent of when Luke stepped into the Cantina in Mos Eisley, although perhaps not quite as exotic.

I have yet to play through the entire series with both my Shepards, but my first Shepard was a male one, who was a bit of a diplomat with a definite tendency towards paragon. With my initial save file I spared Wrex at Virmire, but due to the fact that I played the first game on a debug unit I wasn't able to export that file over when playing Mass Effect 2. Subsequently some of my choices including Wrex were reversed as I continued on. My second, female, Shepard, was distinctively more renegade, and she was one for harsh and quick decisions. She was also distinctively more pro human, a stance that went along with her background on a colony hit by the Turians.

It's difficult to rate which of the three games I enjoyed the most.

They each had their moments and they each had their rightful place in the trilogy. The first game may have been plagued by repetitive mining and Mako missions, but it also provided us with some of the most memorable moments, such as the whole experience on Virmire making a tough choice with Wrex and the Krogan race, as well as picking between Kaiden and Ashley.

The second game brought a lot of improvements to the mechanics and streamlining the experience, while adding some of the most memorable cast members including Mordin and Thane. It was a fast paced middle, that provided us a connection to Cerberus that we only fully appreciated once they were our enemies again.

The third game gave us most of the answers we were looking for, especially after the altered endings, and it provided us with an almost numbing number of farewells.

There were plenty of great villains in the Mass Effect series, from Saren to Sovereign, Harbinger and The Illusive Man. They certainly helped carry the series along with the cast of companions that for the most part were brilliantly crafted.

There are so many impactful deaths and moments to choose from, but as Tali stepped off a cliff on her homeworld of Rannoch in Mass Effect 3 it really made me question my decisions when dealing with the Geth and the Quarians.

The way things played out on Rannoch was difficult to deal with, and is good example of how the Mass Effect series presented you with choices where there was no clear right or wrong path. The way I was roleplaying Shepard I wanted to allow artificial life to remain independent, and as the Quarians committed the first act of aggression I sided with Legion at that crucial moment. Not only did that decimate the Quarian fleet, but it also sealed the fate of Tali in a precursor to some of the choices you were faced with at the very end of the game.

Mass Effect Trilogy will be released this Friday for Xbox 360 and PC - the PS3 version is due to land on December 7. 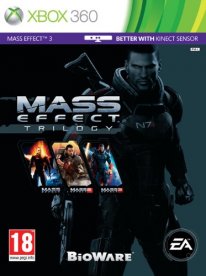