"You will never find a more wretched hive of scum and villainy." A classic quote from a classic film, describing one of my favourite locations in all of the Star Wars universe - Mos Eisley. It's a description that would go far to describe Mass Effect's Omega space station as well. And thanks to its pivotal role in Mass Effect 2 and the novels, Omega is easily one of my favourite locations in the Mass Effect universe.

Naturally it was with great excitement I went about downloading the rather sizeable DLC Omega for Mass Effect 3. Finally Aria T'Loak, queen of Omega and underworld boss would be playable, after what must be considered the somewhat brief and underwhelming role she played in the main story of Mass Effect 3.

Omega plays out pretty much like you'd expect any story related DLC in a Mass Effect game. Once you return to one of your old saves a message appears on your personal terminal letting you know Aria wants your assistance. Cerberus kicked her off her throne on Omega and she wants your help reclaiming the space station. Simple task you'd think for a man or woman who has taken down several Reapers and is just about to save the galaxy.

Well, it turns out there's a clever general orchestrating Cerberus at Omega, and you will face not only the numerous Cerberus troops with everything from the engineer to the nemesis and atlas, but also mechs and some kind of experimental reaper creatures called Adjutants. It provides a good mix and the action is for the most part intense and well balanced. The pace is great, mixing in some slower sections with intense action that resembles the mayhem you experience online with the Galaxy at War co-operative mode.

In many ways Omega plays like a few N7 missions glued together. You're often defending positions from waves of attackers, and the environments are fairly bland and don't really measure up to the locations of the main story. For the most part you'll be tredding through mines, factories and industrial looking corridors. Nothing wrong with that, but the expansion could have done with one or two more inspired vistas.

As you might have expected the expansion is light on story and heavy on action. You'll learn a little more about Aria, and perhaps influence her demeanour in one way or another. Nyreen, a female Turian, who will join your squad on and off (none of your regular squad mates are available for the mission) - serves as a story device letting you in on some of Aria's secrets and Omega. Personally, I found the story utterly underwhelming, and perhaps Aria is better suited as someone who is at odds with Shepard than your ally.

The foundation of the fantastic Mass Effect 3 naturally remains, and you'll gain access to new weapons and abilities you can use throughout the game with Omega. I particularly took a liking to the new assault rifle that packed some real punch, and the new flare ability was also a nice acquaintance.

Aside from some technical quirks in the cutscenes (strange animation glitches and the likes) Omega handles well - even when there are more red dots on your radar than you'd ever like to see. The voice acting is of the same calibre as usual, even if the dialogue lacks some of nuance and depth we've come to associate with the franchise.

I played through the expansion around four hours, someone who does less exploring will probably get it done in less - and while that is what we come to expect from this kind of expansion it still doesn't feel like good value at a tenner. Pick a random 4 hour stretch of the main game and you'll get an experience that is far better than what Omega offers, even if I like the idea of giving the player a pair of new squad mates and new enemies to contend with. At the end of the day, if you're a die-hard fan and a completionist you will find some enjoyment with Omega, but if you stay away you're really not missing out on anything special.

Mass Effect 3: Omega DLC is available now for 1200 points (Xbox Live), or £9.99 (PSN/Origin). There are currently no plans to release Omega for Mass Effect 3: Special Edition on Wii U.

Advertisements
Gamereactor UK
+
+ Intense action. + Nyreen was a nice new acquaintance. + New enemies.
-
- Story disappoints. - Poor value. - Boring environments. - Nothing to return to upon completion.
is our network score. What's yours? The network score is the average of every country's score

We return to the mushroom shaped space station at the heart of the Terminus System.

REVIEW. Written by Thomas Blichfeldt on the 6th of March 2012 at 08

"With Mass Effect 3 Bioware has created a final chapter that triumphs where so many other closing chapters fail..."

There's a Mass Effect Easter egg in the Amazon Echo

"Does this unit have a soul?"

Jack and Sarah are the most popular Shepard names

Bioware reveals the most popular choices in Mass Effect.

ME3 among free PS Plus games

Read these leaked accomplishments at your own peril. 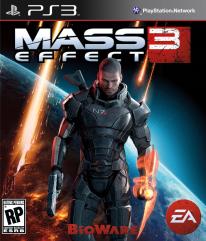