The original Mass Effect was something of a revelation. It had flaws (driving the Mako over mountains for one), but overall it pointed us to the future of story driven role-playing slash action adventure titles.

When Mass Effect was announced at X05 in Amsterdam it had something in common with Silicon Knights' Too Human. Both were somewhat arrogantly announced as trilogies. And while I doubt we will see the Too Human trilogy come to fruition on Xbox 360 or any other future platforms for that matter, it does seem a safe assumption that Mass Effect 2 will be the middle chapter of the Commander Shepard saga. The "Empire Strikes Back" of the Mass Effect trilogy.

Before I played the original, I read the novel Mass Effect: Revelations, and likewise I've read another novel Mass Effect: Ascension in anticipation of the sequel. The first novel gave us the back story of John Anderson and added a lot of depth to the story of the game and hopefully the second novel will help in a similar manner.

With the universe safe from Soveriegn one would think all is well and Shepard would be sipping some Asari variety of an cocktail (with umbrella) on an exotic resort planet. Not the case. Instead a mysterious threat against mankind has surfaced two years after the attack on The Citadell. Human settlers have been taken from their homes in far off colonies and noone quite knows what this new threat to mankind is all about. Could it be connected to the reapers? Is there some kind of sinister anti-human agenda? Could it be the mysterious Collectors from the novel Mass Effect: Ascension? We are not told at this point, but Commander Shepard needs to assemble a team of top operatives to go on one last suicide mission to save mankind.

The first teaser for Mass Effect 2 hinted at Commander Shepard being killed in action, and while he is very much alive as the game starts the player can turn the campaign in Mass Effect 2 into an actual suicide mission with Commander Shepard perishing in the end, but keeping him alive is very much possible and your actions in this third chapter will naturally have a major effect on how the third game will start. But let's not get ahead of ourselves... we still haven't seen much of the second one.

During the E3 presentation we were given a look at a mission where Shepard tries to recruit a new operative - drell (new race in Mass Effect 2) assassin Thane - the plan is to intercept him as he is on the job trying to rub out an old acquaintance of Shepard (you can check out that scene in the video below). Apart from the addition of the drell race, Bioware have also released information about the Vorcha, a primitive and extremely aggressive race that we presume are going to give Shepard and his gang a proper challenge somewhere during his adventure.

One interesting scene that Bioware included in their presentation was that of a destroyed Normandy with Shepard and his crew abandoning ship. Was it one possible turn of events? Was it the end of Shepard? We were left in the dark on that one, but it is clear that this middle chapter will shake up our preconceived notions about the Mass Effect universe and Commander Shepard.

While the combat in Mass Effect took a while to get into I found it deep and rewarding, using biotics to lift enemies and combining it with markmanship never got old. The controls were however a bit unresponsive and ignorant of some basic action principles. This is something Bioware aims to fix in the sequel where controls will be more responsive and a head shot will be a head shot. You will still pause the action to get a good overview and set special attacks, but Bioware are obviously flirting with the more action oriented crowd and in turn that crowd could do with a story of Mass Effect's scope.

Mass Effect 2 is probably my most anticipated game at the moment. Not just because I want to learn more about the story, but also because of all the options that Bioware are giving me as well as the improvements made when it comes to the exploration and combat. I've played through the original a couple of times, and the idea of going of killing off Shepard in order to fulfill the mission, or doing everything to keep him alive, will force me to play the sequel at least two times. And that is most likely a very good thing.

Thank you for your time. We will take care of this matter as soon as posible
looks amazing! 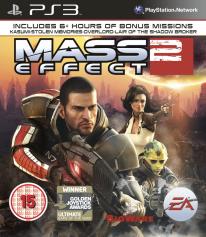