Get a closer look at Square Enix and Crystal Dynamics' take on Tony Stark's metal-clad superhero.

A new teaser video has shown off the costume, which will be unlockable in Square Enix and Crystal Dynamics' game.

See what we thought of Marvel's Avengers in our video preview

Here's what we thought of Square Enix's much anticipated title that had a playable demo at this year's Gamescom.

Square Enix and Crystal Dynamics have shown us the heroes in action, coming all the way from Gamescom.

Attendees can play both games in Cologne, and there are other activities for Final Fantasy XIV Online, board game enthusiasts, and more.

Avengers Comic-Con gameplay to be unveiled after Gamescom

We also know that a collector's edition is on the way, not to mention customisation for our heroes in-game.

Comic-Con updating us on Avengers, Iron Man VR, and more

Ultimate Alliance 3 will also be shown off in San Diego this month, meaning that there's plenty to look forward to for gamers.

The game's director digs into some campaign details and the loot system during a recent interview. 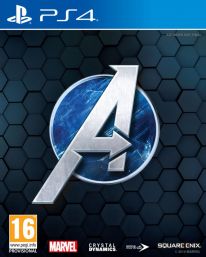