My thoughts immediately associate this with some kind of philosophical role playing game, and I don't think I'm saying too much if I claim that there could be no background that has less to do with the chaos that is Marvel vs. Capcom 2: New Age of Heroes.

When I'm put in control two teams made up of three characters each have taken to the screen. And while my simple goal is to beat the other team to a bloody pulp I can hardly take a breath before the screen is filled with all the colours of the rainbow and laser beams.

Fire balls, laser beams, and what I can only assume to be "robot vomit" fly from one end of the screen to the other and while I sometimes feels as though I've lost control over the chaos I am certain that I am enjoying myself.

It most be with a certain amount of pride Capcom can lay claim to having the most chaotic 2D fighting on the market, despite the fact that it was released nine years ago. Perhaps this is also the reason why an updated version of the game found it's way onto Playstation Network and Xbox Live Arcade.

It's a fighting game in the classic 2D style with beautiful pixel characters, the kind your HD set may not like very much, and they have tried to scale these as best they can. Since the game was originally developed for Sega's Dreamcast (or rather the arcade version NAOMI to be exact) the backgrounds are in crisp 3D graphics giving the game a very distinct look.

This strange mix of pixels and polygons sometimes means you might lose some overview. And overview is something that you quickly need to get as you choose characters from the 56 fighter strong roster. They have many different strengths and strategies they can deploy whether they are good up close, ranged or in the air, it's up to you to decide how what your team will be like.

If you are already well versed with the Marvel universe and the heroes of Capcom's games you will probably push your way through the selection fast. And in most fighting games this would be blasphemous as style is everything. But Marvel vs. Capcom 2 holds a little secret.

Despite building on the foundation of one of the deepest and most balanced fighting games ever (Street Fighter 2) the focus with this game is something entirely different. Capcom were never shy to reveal that the game had been simplified to allow it to be more accessible. From six buttons down to four, less damage from attacks and the number of projectile attacks increased.

That is why Marvel vs. Capcom 2 from a stylistic point of view are closer to the territory of party games such as Super Smash Bros. Brawl more than say Street Fighter III or Virtua Fighter 5. Most people will do well just mashing away at the buttons and see their character launch missiles, plasma beams and small planets at their opponents, while with a bit more practice and skill you can fill the screen with mighty combination attacks.

This simplification has caused a divided fighting community, those who are looking for a competitive and well balanced multiplayer, and those who don't. The game was not really designed with this in mind. It is a lot of fun to see the combo counter shoot into the sky, but not as much fun when you realise the game lacks the depth that requires great timing and patience to master in other games.

Capcom doesn't seem to have put too much work into balancing the many characters as they have been more or less copied and pasted from the respective games. Felicia, Anakaris, and Baby Bonnie Hood may all be strong characters in Darkstalkers, but thrown into this new game their magical attacks fall short of Iron Man's particle cannons and Ryu's fire balls and dragon punches.

Marvel vs. Capcom 2: New Age of Heroes should be viewed as a great introduction to the genre as it quickly throws the player into a beautiful world of colourful explosions. But once you look past the surface you will want to graduate to one of the more advanced fighting games.

Gamereactor UK
+
Huge cast of characters. Lots of different styles. Cheap.
-
Often random fights. Too chaotic. Not enough depth.
is our network score. What's yours? The network score is the average of every country's score

A church surrounded by an ocean of long, green grass and gentle breeze that sweeps across the landscape. That's the background on the screen and I almost fall asleep watching it.

A stack of new screens.

This summer on PSN and XBLA 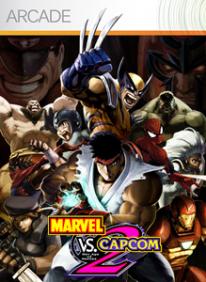