We last received a Marvel Ultimate Alliance game in 2009, and back then we joined the likes of Spider-Man, Wolverine, and more on a collaborative journey to save the day. A lot has changed in 10 years, and now the series is back with Ultimate Alliance 3: The Black Order, except this time as a Switch exclusive, forcing us into a battle against Thanos as he looks to gather all of the Infinity Stones for himself.

Sound familiar? Well it should, because this game is clearly drawing upon the Marvel Cinematic Universe - or MCU - that has unravelled over the last decade. The plot is very similar to what we've seen come to a close in Endgame, and the Guardians of the Galaxy also make a core appearance, as do Captain Marvel and some more Spider-Men(Mans?) as seen in Into the Spider-Verse. Essentially, if you've watched Marvel films and kept up to date, you'll know everything here rather well. Hell, even if you've just watched the Netflix series that have emerged over the last few years, you'll see things you recognise.

This is all good news for people coming in from the films, but at the same time Ultimate Alliance offers fresh takes on established characters (we've got classic outfits for Wolverine and Cyclops, for example) while at the same time bringing even more characters into the fold. We never saw the X-Men and Deadpool take the fight to Thanos, for example, but now we can, and there are even more obscure heroes in the roster like Psylocke and Scarlet Witch, who many may not have encountered before.

The game opens with the Guardians of the Galaxy, who encounter a strange energy reading and find themselves caught in the crossfire as Thanos' minions look to get the Infinity Stones. After a slight mishap with one of these stones, we find ourselves in Raft Prison meeting Nick Fury and many other heroes, and the story changes gears from there as you look to gather the Stones and save the universe from destruction. Classic hero stuff.

This first chapter serves to tutorialise the main mechanics, which Ultimate Alliance fans will remember rather well. You light attack with Y, heavy attack with X, jump with B, and interact with A, and you use all of these buttons to assign a specific special attack when holding R. What's more is that, when holding ZR, these turn into Synergy Attacks with your fellow heroes in the team, and pressing R and L when your yellow gauge is full activates Extreme Attacks for maximum effect, unique to each hero and most potent when combined with others. Essentially, Team Ninja has created an action game with a lot of variety, and a lot of chaos when the screen fills up and you unleash your wildest moves.

As the campaign unwinds we're given various excuses to visit iconic locations from across the Marvel universe, from Wakanda to the Dark Dimension and everywhere in between. Not that we're complaining - this is what Marvel fans want to see, after all - and it gives the game a chance to throw more heroes into the mix who then join your team. The plot bounces around a bit as a result, but let's be real - we're here to kick Thanos' ass once again, and everything that comes before that doesn't really matter.

Each level and hero is cartoonified without losing their signature personality, and you'll still recognise all your favourite things from each franchise. It's a colourful game as a result, packed with special effects during combat, and it's a joy to go from chapter to chapter just to see what's next, exploring all of the different areas for hidden loot while also battling the various grunts and bosses that come your way.

A core part of the experience is the bosses that you face, and these are perhaps the most memorable points of the game. Not only does this give Team Ninja yet another chance to crowbar more characters in there, including again some lesser-known baddies, but it also diversifies combat as you have to deploy a variety of tactics to take them down. Let's be clear though, most of the time you'll still be spamming all of your attacks onto the one boss to deal as much damage as possible, using your Synergy and Extreme Attacks to tear them a new one.

These attacks can be upgraded as you go using in-game currency that you collect, and more attacks are unlocked as you level up, constantly keeping things fresh alongside the injection of new heroes. There's always something new to try, and considering new teammates are added to your roster at an appropriate level to where you are at that point in the story, it's always worth swapping them in and out to see what they have in store, and half the fun was just trying new heroes to see what cool attacks they brought to the table. At one point our team was a selection of various Spider-Man variants, but as time went by we settled on Spidey, Black Panther, Storm, and Deadpool.

In fact, the entire upgrade and customisation system is surprisingly deep, and we were grateful that it was layered on gradually. As well as upgrading attacks you can give you characters XP cubes to level up; visit the Lab to unlock elements of a skill tree to improve stats; and assign and modify ISO-8s, which are crystals designed to give specific in-game advantages, sometimes in exchange for lowering another stat. There's a lot to fiddle with, and you'll spend a lot of time in the menus tweaking your team, but it's all worth it when you take your improved squad out into the fight.

These upgrades are enough to keep completionists sweating, but even after the credits roll you have Infinity Trials to complete as well. These appear as bright tears in the universe in the campaign, and offer unique challenges like taking on the first boss, with the condition in this particular Trial being that your light and heavy attacks do significantly reduced damage. On top of that there are other challenges within these Trials that give extra rewards, like time limits, so they're only for the toughest of cookies to crack on with.

It would be remiss of us to talk about Ultimate Alliance without mentioning the co-op element, because that's one of the central appeals of this title. From the aforementioned Trials to the campaign itself, all of this superhero action can be experienced alongside up to three friends, either online or local, and it works just as well in 2019 as it did a decade ago. You can work to build your own team together, manually combine attacks, and defeat Thanos - and even though it can be chaos at times working out who's who in the battle, there's a lot of fun to be had with your buddies.

What's not fun at times is the camera, which often poses a little bit of an issue, especially when two players are pulling it in different directions. We often found it moving through scenery, getting stuck on or behind some part of the level, and generally jittering around in tight spaces, and it proved especially annoying on the second chapter at the prison, where it really struggled with the tight corridors and changes in perspective at times.

It's safe to say that Marvel Ultimate Alliance 3: The Black Order is a solid continuation of the series that combines the fun co-op action of past iterations with the relevant characters, locations, and stories from Marvel in 2019. It's extra fun with friends (although we'd say the screen gets a bit too cluttered in the handheld and tabletop modes), and there's enough depth packed in there to make this a game worth picking up for any Marvel fan, especially if they've been visiting the cinemas to savour the MCU in recent years.

Advertisements
Gamereactor UK
+
Deep and varied roster, Many locations and Marvel references from franchises new and old, Deep upgrades and customisation, Fun and chaotic gameplay even in co-op.
-
Annoying camera, Looks a bit cluttered in handheld.
is our network score. What's yours? The network score is the average of every country's score

"There's enough depth packed in there to make this a game worth picking up for any Marvel fan, especially if they've been visiting the cinemas to savour the MCU in recent years."

The Team Ninja RPG Marvel Ultimate Alliance 3 is getting new content shortly and to get players ready for the DLC, five free outfits are free to grab right now.

The first chapter is out now, with two more set to follow in quick succession.

The Curse of the Vampire is here, as is a free update that adds some extra features for players.

Vampires descend on the game as Blade teams up with Punisher and more to deliver a new Gauntlet Mode.

Check out our video review of Marvel Ultimate Alliance 3

We took on The Black Order and lived to tell the tale.

We got trapped in Raft Prison and met some friends and enemies along the way, all with a buddy at our side. 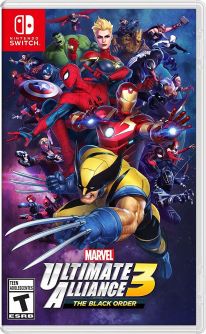