If you're from Europe and have made a trip to the US during the last couple of years you've probably noticed the new registrations and how complicated it can be to get into the country. And if we're supposed to believe Marvel Ultimate Alliance 2 the next logical step is to start a register over all kinds of super heroes and mutants. Everything according to the plot line of the crossover Civil War that Marvel published in their comic books a few years back.

Some heroes, including Iron Man and Mister Fantastic, supported that particular plan while others, like Captain America and Iron Fist, thought it was an attack on the personal integrity. What other way to solve the problem than by starting a proper war? Marvel Ultimate Alliance 2 is a semi-sequel to that story, but tells a new tale about how Dr. Doom attacks the special force S.H.I.E.L.D, which forces the super heroes to settle their differences and band together once again.

But please, forget about the storyline for a minute, despite the fact that Vicarious Visions have worked hard on it and even added dialogue to the game. Marvel Ultimate Alliance 2 is about fighting, nothing more and nothing less. And while the graphics aren't all that, the bugs all too frequent, the menus a pain to navigate and the camera a complete mess, the fighting is actually a lot of fun. You control your small troop of super heroes while clobbering bad guy after bad guy, finishing up simple missions such as defending convoys and spanking super bosses. 'Nuff said.

It doesn't really get more complicated than hammering away on a single button against a never ending stream of soldiers, mutants, robots and whatever else might try to put a stop to a true super hero. The more cannon fodder you take care of, the more experience you get, and the more skills and powers you unlock. Levelling an already existing super hero feels a bit weird at times (how come Spiderman keeps forgetting everything he's learned between games?), but it does make for a more entertaining game.

Marvel Ultimate Alliance 2 reminds me more of Baldur's Gate: Dark Alliance than anything else and there are no parallels between this game and, for example, Batman: Arkham Asulym - except for the fact that both feature super heroes, of course. While Batman's latest game was a well written action adventure where the developers built a quality game from their love for the caped crusader, Marvel Ultimate Alliance 2 is more about quantity.

Vicarious Visions have filled their game with a horde of characters and thrown uninteresting and unbelievable stories on top, the kind of stories that forced Marvel to cancel several of their comic books during the mid-90s. It's also a rather ugly game, where nothing except the high definition graphics points to this being for the Playstation 3 or Xbox 360.

The largest gameplay innovation in Marvel Ultimate Alliance 2 is the possibility to use so-called fusion attacks. The developers were so proud of this function that the game originally had the word "fusion" in the title. At its core it's just another super attack that two specific heroes can do together. If you play with Captain America and Iron Man, for example, the good old Cap'n can use his shield to deflect Iron Man's shots and that way spread death and destruction around him.

There's a lot of various attacks you can do this way, depending on what heroes you decide to bring to the party, and even though it's not really as exciting as it sounds and ideas are recycled a lot, it's still a nice addition that makes co-op even more fun than it already is. Another thing that adds to the experience is how easy it is to shift between characters - just point the digital cross against the character you want to play with and voilá. All the characters also have different costumes to choose between, which have an effect on their stats.

Another nice detail is that the characters are completely unbalanced against each other. Ms. Marvel is not supposed to be able to beat up The Hulk, thus The Hulk is a lot better than Ms. Marvel. As it should be.

Sadly, Marvel Ultimate Alliance 2 is quite bugged, as mentioned before. Especially during co-op, the greatest thing about the game. The camera is not my best friend either and I've cursed at the TV many times, especially when the game has decided to show me a pretty flower bed or the low-res textures of a nearby wall instead of me trying to put Electro or She-Hulk in their places. Another thing that screams low budget is the fact that the game might have a dialogue system where you get to choose to answer in a diplomatic or aggressive tone, but everything you say is only shown in text. That's not very impressive and the writing is rather poor as well, giving the impression of one liners written for kids.

Depending on which side of the registration debate you choose to support you get to choose between different heroes to play with, which gives a certain amount of replayability to the around eight hour long adventure. It's a lot of fun to grind for experience points, unlock new powers and see what the different fusion attacks do. Even though there's a lot in Marvel Ultimate Alliance 2 that feels pretty weak, it's genuinely fun to sit down with three friends and clobber yourselves some mutants and murder robots.

And they will be released very soon.

Marvel: Ultimate Alliance 1 & 2 rated for PS4 and Xbox One

This time it's even more ultimate 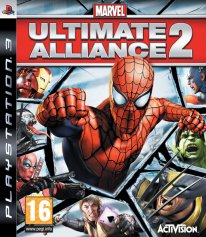