Mario has already spent two decades on the sports circuit, with Mario Tennis marking its 20th anniversary this year. The first game in the series was released on the ill-fated Virtual Boy and it was one of few games that walked away with any kind of dignity from the mess that followed. But while Mario's Tennis on Virtual Boy was a solid game, it wasn't until five years later with Mario Tennis on Nintendo 64 that the series really took shape. This is also where we first met Waluigi - the gangly counterpart to Luigi. Since then we've been given new iterations of Mario Tennis at regular intervals, but alas Mario Tennis Ultra Smash doesn't appear have too many surprises us.

The chance shot from Mario Tennis Open is back. Coloured markers on the ground indicate which shot we can power up - for example to let a lob bounce higher or give the slice a low bounce. What is new is an additional jump for even more power. In addition, under certain circumstances, the marker for the chance shot is brighter. Then we're allowed to perform an Ultra Smash and this shot is almost impossible to counter by the opposing player.

The game is colourfully animated and strays quite far from the realms of the actual sport. Something that makes this even more true are the mega mushrooms. These enlarge your character and make them more powerful (as they should). We also have a longer range and can thus reach shots with greater ease. It's a massive advantage and something you need to make the most of. If you're starting to sweat a bit when you're small you can try and land a body shot on your mega-sized opponent, then the giant shrinks back to normal size. Sadly, the feature with the mega-mushroom is not very innovative in practice.

This also applies to the modes. In addition to the Mega Battle in which there's the new mushroom, there are three other modes. The knockout challenge is a kind of tournament where we compete against increasingly tough opponents. If we fail in a match we can use coins to continue playing. In the Mega Ball Rally the ball gets smaller with every shot. The aim is to achieve as long a rally as possible. And then there is the Classic mode. Here the mushrooms are missing and if you so wish you can also rule out chance shots and jump shots for a more pure take on the game. For tennis enthusiasts that's probably the favoured choice, and it's not like the vanilla game is any less fun.

In addition to the singles game there's also classic doubles. Here teamwork and coordination come into play. And while we're on the subject of cooperation, as is true of almost all games of this kind, that's when it's the most fun, when played with human opponents, especially friends. Then our efforts aren't directed at unknown players, but can be targeted in the form of verbal jabs at our buddies. When you consider that along with the exaggerated nature of Mario Tennis, this is a key element.

And although it's at its most fun when you're in the same room, we're still grateful for the new online mode. Because then even if we're on our own we can have a human player enrich the experience. In addition to ranked games there are also quick matches just for fun. And when online we can also decide which types of shots we want to allow during the matches.

Generally speaking, Mario Tennis Smash Ultra provides an enjoyable experience, but can this satisfy longterm? There are several courts and characters to unlock, but the scope seems rather limited. Somehow one would expect more enjoyable distractions from a game like this, activities in the form of mini-games, but here we only get the somewhat lacklustre Mega Ball Rally. On the other hand we are very well aware just how captivating a good match of tennis can be, and although there are some crazy over-the-top elements, you're still going to need some skills if you want to dominate the court. Our first few days with the game leaves us wanting more, and that's a good sign.

This is why Wario and Waluigi don't have girlfriends

Miyamoto is to blame.

We're serving up yet another livestream at 3pm GMT.

Sprixie is a playable character in Mario Tennis: Ultra Smash 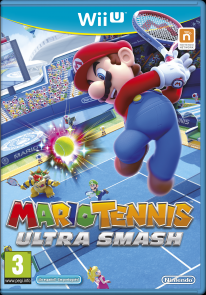