The thumb may be cramping up, but there's no quitting. Not this close to the finish. The frantic hammering of the A button grows more and more intense. Slowly but surely we pedal our way past our opponent. There is a burning sensation in our thumb as we roar across the finish line. The Olympic gold is ours.

The time has come again to put on your best sporting gear and get ready to sweat it out with your Olympic mates, Mario and Sonic. Earlier editions may not have set the world on fire with their quality, and this is something that lingers in the back of our minds as we switch the game on. First up in this 3DS version of the game, we're given an introduction and asked to choose a Mii and a country to represent. After this brief, but oh so important introduction, we're faced with choosing from four game modes: Road to Rio, Pocket Marathon, Quick Play and Versus Mode. The choice falls on the former.

Road to Rio is the closest thing to a career or story mode you'll find in the game. Another tough choice. Do we compete for Mario or Sonic? Once this highly political choice has been made you're free to start your Olympic adventures. We're treated to a miniature Rio that acts as a hub to the various training events, competitions and exercises. Complete an exercise to generate experience and apples; the game's fruit-flavoured currency. The apples can be used to purchase various outfits. The costumes afford you advantages in certain events, while the experience gathered determines what garments you can use. In many ways Road to Rio acts like preparation for the 14 Olympic events you can compete in.

Quick Play is the game's main attraction and this is where you get to show what you have learned playing Road to Rio's lukewarm introduction to the game. This mode offers a variety of Olympic events of varying quality. A common theme is that they entertain for a moment or two, but then quickly become repetitive due to the simplistic game mechanics. The problem is that the selection is too wide and as a result the gameplay depth is missing. The challenge in many of the events is to hammer away as quickly as possible on one and the same button, which gives little, if any, incentive for long-lasting gameplay. Sometimes we're forced to make use of the stylus, which fails more often than it succeeds.

With each event you're also limited to just five playable characters to choose from. For example, you can only play as Mario, Yoshi, Sonic, Daisy or Shadow in football. This is a strange decision that limits player choice, and it actually comes across as quite lazy by the developers. Furthermore, the game offers a rather lacking artificial intelligence that will often fail to offer a reasonable challenge, which is most obvious in football matches. Many times, the opponents stand and stare passively as we run past them.

"Quick Play" is a game mode where you compete against yourself with the goal of improving your records and winning the Olympic gold medal in all events. In an effort to extend the lasting appeal of the offering, there are thematic variations focusing on Mario or Sonic for each branch. Game mechanics, however, remain basically the same and don't do much to enhance the overall experience. "Versus Mode" could have been the game's salvation but it's a disappointment. All of the Olympic disciplines in Mario and Sonic are structured as mini-games where four players get the chance to compete for the gold medal.

The Mario Party-like concept could add value to the game, but unfortunately it offers no online play. To enjoy the game's multiplayer modes it is required to have three friends with their own 3DS handhelds who are willing to meet to compete for Olympic glory. The fact that there is only local multiplayer is really a shame in this day and age, and it limits the potential of the mode. This game begs for online play and not offering local multiplayer feels like a massive miscalculation.

If you walk around with your 3DS in your pocket on a regular basis "Pocket Marathon" might be something for you. This mode works like a pedometer, where the ultimate goal is to walk a full marathon of just over 26 miles (or 42 km). As you reach various milestones you're rewarded with items that can be used elsewhere in the game. A neat idea, but it adds little in terms of playability and interaction, and requires you to constantly carry your 3DS around.

From a visual point of view Mario & Sonic is really beautiful. The graphics are colourful and they offer the typical Nintendo warmth, and the high-energy music helps to raise tension in the various competitions, but it's not enough. Mario & Sonic offers a concept which, if done right, could be both entertaining and engaging, but instead it's hampered by limited player choice, a lack of online play, as well as mechanics that fail to offer meaningful depth. Thus Mario & Sonic at the Rio 2016 Olympic Games ends up far from the Olympic podium.

"It's a combination of good and bad decisions where the good ones tip the scales in their favour by the skin of their teeth."

"It's hampered by mechanics that fail to offer meaningful depth."

So far only confirmed for Japan. 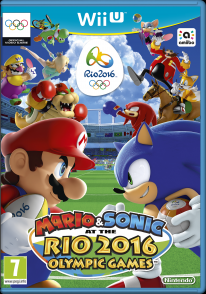