When we first heard about the mash-up we were naturally skeptical. Mario, one of the most beloved and sacred characters in interactive entertainment, being paired with Ubisoft's hit and miss comedy act Rabbids in an Xcom-style turn-based strategy game? It's a recipe that, at least when you read it and picture it in your mind's eye, shouldn't work... It brings to mind those mash-ups of old, like Hyrule Warriors, that's nothing short of confusing, where two structures are taped together in the hopes that they may end up complimenting each other. They appear to come from the minds in the boardroom, rather than the offices of game developers. However, what harm the initial leak did to the game was ultimately erased from memory by a stellar and memorable E3 presentation, where Yves Guillemot and Shigeru Miyamoto gave the game their full endorsement at the Ubisoft press conference, and as the camera swooped around to show an excited crowd, we caught a glimpse of a touched game director.

But, more importantly, it's a risk that paid off, and the response from Nintendo fans, a crowd that can be very tough to please, was staggering. Ubisoft hasn't always been known for putting out quality on Nintendo platforms, but the Mario fanbase have embraced Mario + Rabbids Kingdom Battle as one of their own, and expectations rocketed. So, to summarise, high stakes equals high rewards, and this unusual teaming of Nintendo's various mascots and Ubisoft's risky strategic gameplay structure makes for one interesting cocktail.

First up, let's explore the narrative reason why these two universes have clashed together. Because, as you'd expect, it's quite absurd, and not necessarily in a good way. In essence, a VR headset which somehow has the ability to combine elements together is being tinkered with in the basement a genius prodigy. For reasons unknown, the Rabbids arrive to abuse the headset and combine themselves with the universe of Mario, as the prodigy has a poster of the Nintendo mascot hanging on the wall. And that's pretty much it. Why some Rabbids are mean, where others are benevolent allies? Well, the game doesn't really care, and ultimately neither should you. After all, this isn't the first time the Mushroom Kingdom has been under siege by some vaguely defined threat, and it certainly won't be the last. It's the premise itself that's nonsensical, but in a way, the Rabbids characters fit quite well within the absurdity of Mario's world. Your main allies, at least from the offset, are two Rabbids posing as Peach and Luigi, and they do this in quite hilarious fashion. It makes for great entertainment to watch these beings react to the childish weirdness of the Mushroom Kingdom, and shakes up the narrative structures of the world in quite the genius manner. So, don't expect depth, but expect a mashup of two distinct worlds coming together to great success.

More so than nailing the narrative in smashing these two universes together, Ubisoft has created a familiar yet distinctive visual take on the familiar space. Don't be fooled, the Mushroom Kingdom is still overtly the Mushroom Kingdom, and even though Nintendo has been happy to give players new angles and perspectives to play with over the years, the world itself is still incredibly familiar. Even though terrain gradually changes as Mario and his merry band of Rabbid imitators charge through one world after the next, offering lava pits and snowy mountains, it's the same basic square-ish world design you've encountered numerous times before. You could, for instance, take the environments of Super Mario 3D World on Wii U, tilt the camera slightly and you'd come pretty close to what you see in Mario + Rabbids Kingdom Battle. However, this is more positive than negative, as Nintendo's characters thrive through familiarity and iterations of the already known. It's like coming home years after you've left the nest, and seeing that everything is exactly you as you left it - it's safe.

The environmental changes come primarily through the Rabbids influence, and strewn across the various worlds you'll find new additions like Rabbid-themed cannons that can shoot you afar, special tunnels to find hidden areas and other simple environmental puzzles that bear the Rabbids theme. Overall, there's a simplistic attention to detail that reverbs throughout the entirety of Mario + Rabbids Kingdom Battle, and despite not offering something thoroughly original world building-wise, it does sprinkle a few new ideas over the massive layer cake that is the comfortable known quantities. That is Nintendo and Ubisoft knows this. They understand.

But, despite heading through familiar visual territory here, you'll notice the slightly tilted camera, providing a more isometric overhead-view of your surroundings. Well, that's a clue, because Mario + Rabbids Kingdom Battle may trick you with a familiar setting, but the game is unlike any Mario game you've ever tried. In fact, it doesn't even come close to anything you've seen the mascot partake in. You see, Ubisoft has not only chosen to combine this beloved universe with their Rabbids, they've chosen to further combine this mashup with the turn based musings of proper team-based strategy games like Xcom: Enemy Unknown - actually the game shares a lot of mechanical and structural DNA with Firaxis developed strategy title. Throughout the various worlds, you'll alternate between exploring somewhat open spaces and so-called Battle Spaces, where you must defeat a range of foes in turn-based combat. Each Battle Space is clearly signposted with two black pirate-like flags, and once you enter combat, you'll be introduced to the enemies you'll be fighting, and given the chance to place your party of three characters as chess pieces on the board before fighting commences.

The similarities with Xcom and other turn-based strategy offerings are plentiful. You'll choose between half or whole cover, decreasing the chance of incoming damage, you continuously move and fire across a scalable terrain with upgradable weapons, using flanking and the power of lady luck to take down waves of enemies - it's quite blatant in revealing its inspirations, and because of this, it's forgivingly honest. There are, however, some original additions to the formula worthy of note. Characters are allowed two moves essentially, beginning with a physical attack. After this, you'll be able to alter your course, and choose a cover from where you'll fire your ranged weapon. This creates a lot of movement across the various participants each turn, resulting in a more frantic and intense scenario. It also loses some of the slow-moving strategic feel of Xcom, but gains an identity of its own in the process. Furthermore, you can use your comrades to team-jump across the map to increase the area in which you can move, so it's easier to get the drop on your foe. Overall, it's simply faster, simplified and more accessible, but it never loses the tactical satisfaction of outsmarting the enemy.

In Mario + Rabbids Kingdom Battle, there's the opportunity to play alongside a buddy in specifically designed cooperative challenges. These are not part of the main story, and are selected from a base in the hub world. Ultimately, they do sprinkle a tad of strategic variation to proceedings, and as you climb through the various levels, these cooperative challenges do require you and your partner to think twice before executing a turn. It's a simple but worthwhile addition, and one could wish that cooperative play would've been incorporated into the main storyline.

If you're looking for intense strategic and tactical depth, you won't find it in Mario + Rabbids Kingdom Battle, but what you will find in a game that steadily turns up the heat with a wide array of enemy types, boss battles and the like, but never punishes you and forces you to rethink your playstyle. It's Xcom, but it's Xcom in Nintendoland, and Nintendo is for everyone. Again, Ubisoft could've gradually created one scenario after the other that would turn up the heat on the player, but they refrained from doing so because they understand what playing around the Mushroom Kingdom is all about. This accessibility comes, however, always at a cost, and when the final credits roll, you're both left satisfied with the experience you've gotten and the evolution the formula has undergone throughout the experience, but you'd also wish that they'd done more with such a strong mechanical structure. Mario + Rabbids Kingdom Battle is not an RPG in the strictest of terms, but it could've used some more of that DNA to add more layers to the experience. There are various weapons, with their own sets of bonuses, to consider, but no armour or additional items to wear and use. There's a superficial skill tree, but nothing that drastically alters your approach to each character. Many classic adaptable tropes are to be found here, but none of them quite offers the depth that a connoisseur of the genre might be used to. It's not barren, not even in the slightest sense, but it is overly simplistic, and you may find fault with that.

However, what Mario + Rabbids Kingdom Battle may ultimately lack in depth, it makes up for in charm, in design, in intent, and in self-awareness. It's funny, beautiful, sharp, well paced and fits like a glove on Nintendo Switch whether it's on the go or in front of the big TV. We had our trepidations going in, but it ultimately won us over. Indeed, this is a concept that shouldn't work, but it does. In fact, it works very well.

"We didn't even miss Mario's moustachioed face, and that's saying something."

"It's funny, beautiful, sharp, well paced and fits like a glove on Nintendo Switch whether it's on the go or in front of the big TV."

Sam tried it out for us on the livestream.

His new expansion has landed in the game.

But the studio is open to ideas.

We got our hands on the upcoming expansion for last year's surprising tactical mashup.

A fresh story and a new world for fans to explore. 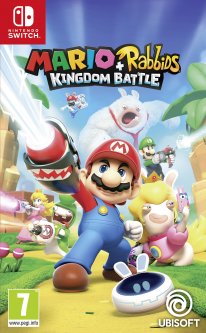