Only two rounds remain, my friend felt confident with 58 collected stars. I only had 30 so the game was pretty much over. One dice roll later and we end up on a Bowser tile, and he suggests that we play for half of everyone's stars. My friend had to bet 29 stars, while I only had to bet 15 and the rest of the players even less than that.

A mini-game that saw us throw a bomb into a bunch of Bob-Ombs commenced and the idea was to create as small a chain reaction as possible. I ended up winning the round and all of a sudden I was swimming in stars. My friend wasn't as happy, but during the next round he was first robbed of 10 stars and then ran into Bowser again, who took half his remaining stars. All of a sudden he was dead last.

In all other games I would have hated this sort of scenario, but in Mario Party 10 I love it. That pure, unadulterated sense that anything can happen with the roll of the dice. I can make the best strategic decision and win all the mini-games, but in the end it's often luck that decides the outcome.

This makes it so that everyone can play, and this means that Mario Party 10 is a game where people who laugh at the challenge that Super Meat Boy presents can play on almost the same terms as a 5 year-old who has never even played Mario. The better player will win more frequently, but not always. Add to this the prestige that lies in besting the various mini-games and you've got a nice balanced package.

Mario Party 9 was something of a new beginning for the series. Instead of games that took about an hour to complete where you went lap after lap on a game board, Mario and the gang jumped into a vehicle and went on a small adventure. The number of mini-games decreased, more random events was added and coins and stars were put aside and replaced by mini-stars. Some players didn't approve of the changes while others loved them.

I belonged to the latter group. Sure there were drawbacks, but Mario Party needed to evolve and that's exactly what happened. The levels were given more pronounced themes with mini-bosses and a big fight at the end. With Mario Party 10 the developers Nd Cube continues where the last game left off, and so it is the more modern concept that applies here. This time, however, there is also the option of playing traditional mini-games if you've got Amiibos from the Mushroom Kingdom available to unlock these.

Amiibos work similar to when there is DLC on the disc as you won't be able to access the content unless you've got the right kind of Amiibo. And you'd likely want more than one to have some boards to choose from. This could have been a good idea if it wasn't for the fact that Nintendo forces you to use the Amiibo during the actual game as well. With each roll of the dice it is required that the Amiibo touches the GamePad. It makes us think of when a simple press of the A button had been replaced with the need to shake the Wiimote last generation.

I take away some of the fun and even though I've got plenty of Amiibos for both myself and my friends it doesn't seem a hit to hold a figurine in your hand while playing. It had been way more user friendly to just use the Amiibo to unlock the content and then leave it unlocked for as long as the Wii U was on or the current game was playing. There is little risk of this being misused and most Amiibo collectors I know are reluctant to open the packaging.

If you don't have a problem with this set up you can look forward to a lot of Amiibo content, something that has resulted in fewer standard boards in Mario Party 10. There are 5 to choose from, and a pure mini-game mode that is very neatly designed. I have to say that is a bit disappointing on the whole.

When the Wii U was announced I predicted a new Mario Party would arrive shortly. That wasn't the case and instead it would take 2 and a half years for it to appear. It's a bit strange given how the GamePad opens up great new possibilities in the game. But it turns out Nintendo haven't really taken much advantage of the GamePad and it is only put to proper use on rare occasions.

During normal games Bowser finds himself behind six sets of bars, each representing a roll of the die. When you've rolled six times he appears and makes things difficult for the person who rolled the decisive die and he'll also place a few traps further ahead. While it's nice to see Bowser behind bars (and Toad in one of the levels), it's not exactly the most impressive use of the second screen.

But there is a game mode where four players need to avoid the fifth one playing as Bowser. It's a nice variation on the game that makes for some hilarious moments, but it comes across as somewhat underdeveloped. It's more of a bonus rather than a substantial addition. Let's hope it gets fleshed out more in the future as the basic concept is solid, but we grew tired of it relatively quickly.

The mini-games in Mario Party 10 are great and of higher calibre than previously. There are still the odd mistake like a level where you run automatically while ducking and jumping. The jumping is performed by waving your Wiimote and you speed up by shaking. Too bad given that the event would have been great with proper controls. Another mishap is the mini-game where you're tasked with counting small enemies like Goombas. But unfortunately you can see what option your friends pick. Therefore it becomes a race to find the correct number quickest and no-one picks the wrong alternative. If the alternatives would have been hidden (say you press the D-pad in various direction to pick an option) then it would have been a terrific event.

There are around 80 mini-games overall so one or two mishaps isn't of major concern. There are lots of great ones. My favourite event sees Mario and the rest of the gang jump on a mountain wall where you can get pushed out by the moving walls or fall as the ground moves. You can mess with your friends while you need to stay vigilant and have some luck. The perfect mix of Mario Party ingredients.

At the end of the day Mario Party 10 is almost a must in your collection simply because it is so suitable to play with all of your friends and family. It's a real treat to see the beautiful and imaginative mini-games and boards in HD for the first time. Some poor design decisions means it doesn't reach the heights of the best entries in the series, but there is no other digital board game that betters this currently.

"At the end of the day Mario Party 10 is almost a must in your collection simply because it is so suitable to play with all of your friends and family."

The Switch has an impressive lineup looking forward.

Tune in for a chance to win Amiibos. 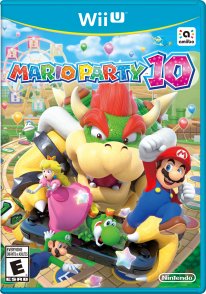