Whether the Mario & Luigi side-series is actively created as a response to that, we don't know. But it is a series that shows how there are few things in the Nintendo universe that the creators aren't afraid to turn on their head or make fun of.

The game takes place in Pi'illo Island, that the gang have been invited to. In addition to its current inhabitants, Pi'illo Island is best known for its past residents, who could travel freely between the island a dream world where anything could happen. While not seen for years, it only takes Luigi to stumble upon a magic pillow (stay with us) for the Bros to start to discover what happened to these forgotten people. Before you can say "mysterious Mario mystery", it's all mixed together as the plumber brothers dive into the dreamscape.

Magical pillows and dream worlds might sound a little... odd, but it quickly turns into an original starting point for the Mario Bros, and a story twist that Nintendo fully exploits.

Those who've embarked on an adventure already with this series will start recognising the same game mechanics, as you control both Mario and Luigi, each brother mapped to one button apiece on the handheld, and the gameplay a mix between standard platforming and roleplaying.

Fighting takes place in turn-based fashion, but as elsewhere, the game doesn't forget the brothers are platform game heroes. So the standard attack is a jump, with extra damage awarded for good timing. Useable bonus objects are koopa shells, fireballs and hammers.

Crossing RPG turn-based tactics and all the traditional Mario themes is as strong as its ever been, yet Nintendo has this time added more originality to the recipe than previously seen.

The dream worlds can be visited every time you find a magic pillow. Luigi nods off and Mario enters his dream subconscious. The 3DS bottom screen shows the sleeping Luigi, while the top screen shows Mario conjured into a 2D world more akin to a traditional platformer than anything seen in the series before.

Luigi is represented here as a dream version of himself, which come the fighting means he merges with Mario, giving his brother all his strength. Super Mario (if you will) can use far more powerful attacks, but can only strike the once.

But the amount of originality as Nintendo has been able to pull out of Luigi's dream form is far greater than just a few extra attacks. If you tug on the sleeping Luigi's moustache on the bottom screen, it appears in the dream world as a slingshot that can fire Mario to new places. Scratch Luigi's nose and he'll sneeze, which will shake the dream world.

Equally original is the Luiginary Attacks. Dream Luigi - and hundreds of his clones - will transform into a giant ball, which can be guided through tilting the console, and used to roll over enemies. Elsewhere he and his clones turn into a tornado that can used to remove everything in its path, and so on.

Despite the fact there's various mini-games and graphical effects that make good use of the console's 3D, this isn't an adventure that has to be experienced with the added depth turned on. The game's no technical slouch either, with plenty of rich colour and design choices that shows the company's still got the best track record in getting the most out of the hardware.

The series had started to feel all-too familiar in the otherwise-excellent predecessor Mario & Luigi: Bowser's Inside Story. Therefore, it's extra encouraging to see how Nintendo have filled Dream Team Bros with one original idea after another. Remarkably, it simultaneously is an adventure that, even without its many new ideas, is simply more enjoyable than before.

The Plumber brothers' latest adventure shows both Nintendo and their handheld console in top form, and contains much of the same magic, surprise and humor of the original Mario & Luigi: Superstar Saga. It is far better than Mario's last attempt at an RPG Paper Mario: Sticker Star and a perfect candidate for the title of summer's best 3DS game.

Gamereactor UK
+
+ Many original ideas + Nice story + Great adventure + Great graphics.
-
- Slow to get going
is our network score. What's yours? The network score is the average of every country's score

It is often very easy to classify Nintendo as the Japanese giant which makes every game as accessible as possible to appeal to the whole family. Which could be interpreted as "safe and easy". 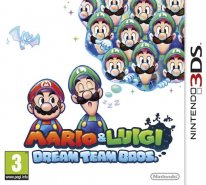