Nintendo always has something new and exciting up its sleeves. From failures such as the Virtual Boy and GBA e-Reader to the ultimate success story that was the Wii, the Japanese company has never been afraid to boldly venture where others dare not. Its newest invention, a remote-controlled toy kart based on either Mario or Luigi that you use to compete in AR races, sounds like a brilliant idea on paper, but does it also hold up on your living room floor? The answer is yes, but only to a certain degree.

Mario Kart Live: Home Circuit nails the start, and it doesn't take many moments from opening the huge box to getting the races going. The kart doesn't need calibration of any sort. You just connect it to your Nintendo Switch by scanning a QR-code, and you can start driving. Of course, it's no fun racing without a track, and because the game takes place as much in real life as on the screen, you have to build the tracks yourself. That is easily done by placing the gates on the floor in a suitable pattern. The gates serve as checkpoints you have to pass, but the actual road is constructed by driving your kart in a pattern of your choosing.

Once the track is complete it is off to the races. And while it doesn't quite reach the heights of Mario Kart 8 or any of the other games in the series, it's still a great experience. Different, but great. The action is viewed through a first-person perspective courtesy of the camera mounted on your real-life toy kart. It's quite fun to race through your own living room, driving past your lamps, bookcases, and other furniture, and seeing yourself on the couch during the race feels a bit like if Gulliver's Travels were made into a movie by David Lynch. Strange indeed. But of course, this isn't just a toy, but also a game.

The game part comes through the standard Mario Kart trappings. Your living room is brought to life with AR-elements such as power-ups, traps, and of course, opponent drivers that you view on your screen. This time you don't race against Donkey Kong, Peach, and the other staples of the series, but instead, challenge Bowser Junior and his minions. Everything that happens during the race also affects your car in the real world, so if you are hit by a shell or crash into an opponent, your car will slow down or come to a complete stop. Since your car can't actually spin out of control or fly into the air, Nintendo has added some new power-ups and effects that fit the unique gameplay mechanics.

One of these is the Chain Chomp. The former environmental trap has this time been turned into a dynamic obstacle. If the ball and chain attaches to your kart, it becomes much harder to handle as the erratic chain pulls it in different directions. Another new feature that affects your car is the environment. Drive underwater and the course will be filled by Cheep Cheeps that carry coins but also can cause you to lose control if you hit them. During a blizzard you have to watch ice hazards that will freeze your car, and take extra care if a sandstorm hits; the strong wind will pull your kart and make steering much harder.

The other items work much as you expect them, so expect the usual frustration once a red shell hits you or you slip on a banana just before the finish line. That being said, items do not quite have the same depth as you can't hold them behind your car to block incoming attacks, and generally traps, power-ups and such often take the backseat to the sheer joy of driving. The kart controls great. It's responsive, breaks, and accelerates in no time, and rounds corners expertly. It may not look very fast when viewed from the outside. But the sense of speed you get when viewing your living room through your screen is simply breathtaking. This must have been how Jack Torrance felt driving around on his tricycle in The Shining. In many ways, the sense of speed is even more impressive than in the mainline games.

The different weather effects and traps placed at the gates, add some much-needed variety to the different courses, that's due to become a bit stale thanks to you constantly driving around the same environments - unless you live in a big mansion that is. In classical Mario Kart style, you compete in 50, 100, 150, and 200 cc races and earn trophies. There are also Time Trials, but these serve little purpose as you can't compare times when you redesign your course. The same can be said for the different cosmetics you can unlock in the form of new kart designs, outfits, and car horns. Sure they look good, but as they have no in-game effect and of course don't change the look of your real kart, it's hard to really care about them. You will probably unlock most content in a matter of hours anyway, so the real value of the game depends on your own creativity - and the size of your current accommodation. Local Multiplayer is an option, but we couldn't test it out, as it requires two of these quite expensive karts.

Much of the gameplay you may have seen in the previews have been from brightly lit rooms that look like something out of an IKEA catalogue with enough floor space to host a major convention. But what about us living in small, dingy apartments. Can we also enjoy the game? Yes, is the answer, but probably only in small bursts. The limited tracks you can create in a smaller room simply holds back the creativity, and it can get very repetitive racing on the same limited tracks over and over, the only real differences being the in-game obstacles. To see what the game really was capable of, I tried some creative redecorating in my living room. My roommates didn't approve, but it instantly improved the experience. Besides changing the physical layout of the tracks, you can customise the gates with a lot of different traps and power-ups, and it really brings life to the experience. You can also add creative physical obstacles to the course. I placed a rough carpet for some off-road racing and it translated remarkably well, but of course, this also adds to the challenge as the enemies don't care two bits about obstacles outside of the digital realm.

The finish line draws near, so how to conclude? There is no doubt that Mario Kart Live: Home Circuit is an extremely well-crafted product. The game works flawlessly and there are all the small touches that mark this as a Nintendo product, such as the battery power of your kart being indicated by a small petrol pump, and a red light turning on when your car is going in reverse. I certainly had a lot of fun with the game, and I'm already thinking of new course designs to try out once the weekend rolls along. Your mileage may vary though, as whether it's a great purchase ultimately depends on the size of your wallet and your living room.

HQ
Gamereactor UK
+
The actual cart is sturdy and handles well. Sense of speed is amazing. The core experience holds up remarkably well. It's fun to create and customise your own tracks.
-
High price and not much content. Requires a very large surface to get the best experience.
is our network score. What's yours? The network score is the average of every country's score

The Mario gang has raced all over the Mushroom Kingdom, but now they bring the Grand Prix to your living room. Surprisingly, it holds up remarkably well.

Three new tracks are also making their debut within the Mario Cup.

Velan Studios brings AR and RC together for you to race with real toy cars on augmented tracks. 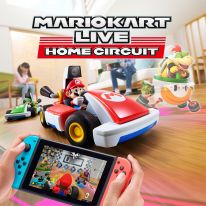