Nintendo has just revealed the box art for Mario Golf: Super Rush on Twitter. In the artwork, we can see Peach, Luigi, and Toad looking awestruck as Mario takes a swing for the ball. This box art is pretty reminiscent of what we got with Mario Tennis Aces, which also launched on the Switch back in 2018.

Super Rush was revealed earlier this month at the most recent Nintendo Direct. It's scheduled to release on June 25 and is the first entry in the series since 2014. Perhaps the most exciting addition within this sequel is its Speed Golf mode. Here everybody tees off at the same time and then its a frantic rush across the course to try and win the game.

You can take a look at the brand new box art below:

The golf title hits the green on June 25.

It's the first entry into the series since Mario Golf: World Tour in 2014. 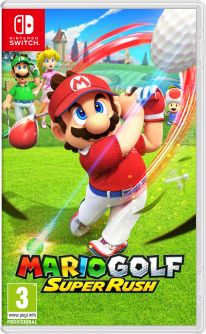