Magicka 2 is a wolf in sheep robes. It may look casual, fun and good for a laugh, but once you bite into it you'll soon realise it's a hardcore experience that requires both skill and strategy to overcome. It's very unforgiving, but there is tremendous depth to the wonderful spell system for those who persevere and learn the more intricate details, memorise Magicks combinations, and manage to stay abreast of everything on on-screen at any given moment. And hey, even if you fail, chances are you'll fail hilariously.

And it's clear the spell system is the main strength here. It transforms what could have been a mediocre action-RPG into something much more dynamic and intense. There have been some minor tweaks since the first game - there are now shortcuts to some powerful Magicks that you can map to D-Pad (at the cost of a longer cool-down). Combining elements to create spells is fun and certain combinations make for extra powerful spells (Magicks). With four wizards on screen the action quickly becomes very chaotic. This chaos is another great strength of Magicka 2, even if it sometimes also makes for a frustrating experience.

We'd say the game is slightly more balanced, even if a steady diet of death-fuelled spells will sort most problems you face (when playing alone we enjoyed electricity and death combos). Not that the balance is a problem, but one of the charms of the original was how dangerously unbalanced it could be at times. It made the friendly fire danger all the more potent. That danger is still there, but it's been toned down slightly. Knowing that it's a new development team in charge of the game's creation, you can sense that the concept has been reinterpreted for better (or worse depending on your tastes), even if the basic premise remains the same.

It's not a tremendously long game (nine chapters), but it will take some time to conquer nonetheless, especially if you ramp up the difficulty. And once you've mastered it there are challenges and artefacts you can activate that will make for tough going.

Speaking of artefacts, this may be the single best addition to the Magicka formula. It basically works like the skulls in Halo: you combine a few of them to create your own custom game. The artefacts are unlocked through progression and naturally activation adds replayability. Some of the artefacts are purely for comedy, while others make the game easier - or far more challenging. There are lots of things to unlock and secrets to discover (from comedy weapons to powerful wands). Unlocking and finding all the secrets in all of the stages and challenges will likely take even a veteran player tens of hours.

We played the game PlayStation 4 for the purpose of the review. Magicka has always felt like a game that was meant to be played on the couch with three friends and as such it works wonderfully well. You can, of course, go online and play with random people (or friends), but perhaps due to not enough people playing, or perhaps due to the weird system for joining in-progress games, it seems difficult to jump into and select appropriate games. And as you can imagine if you're not on the level of the other players, or if they are not on your level it can get a bit frustrating online. It's fun to get showered with water when your casting lighting a couple of times, then it gets a bit... well, irritating. This is the sort of game you'll want to play with friends rather than random people anyway, but it's worth noting. (We have to admit to not being great ourselves online, at least not at first, so we're terribly sorry if we happened to fry you a few times on PSN.)

We did say this is a game best played in the couch with friends didn't we? But there are some caveats there as well. In fact, we'd suggest you learn the basics of the game playing solo. That way you can get a hang of it without dying and accidentally killing your friends off too quickly and frequently. This isn't one of the co-op games you just have people jumping into unprepared at a party. You need some knowledge of how it works (the controls with 8 elements, four ways to cast them and four shortcuts for Magicks take some learning) and you also need a bit of focus. Cause while it is fun with some friendly-fire casualties, if it happens too frequently your friends will likely want to play something else.

The gameplay is solid for the most part, but there are some small issues that we wished the game designer would have thought of. You can get cornered in a way by enemies that the HUD actually covers the player character, and once we were actually thrown off-screen (without dying). Some of this is part of the humour and charm of the game, but some players may find it annoying. At its best Magicka 2 delivers a ballet of constant mishaps, last second recoveries and massive overkill.

It's a game that doesn't really innovate much on top of the proven formula. And normally that wouldn't be a big problem. Why fix something that's not broken? But given the number of updates and DLC the original Magicka got it feels like we haven't had enough time away to appreciate an offering that is fairly similar. The story is predictably silly and the presentation has a touch of amateur comedy stylings that you'll either love or loath, and there are absolutely no vampires. It's good fun and there's lots to learn, but it fails to completely recapture the charm of the original.

Gamereactor UK
+
Spell system is as addictive as ever, Shortcuts to Magicks make it more accessible, Humour is mostly a hit.
-
One or two buggy respawns, You may not feel as overpowered as in Magicka, Could have done with more innovation.
is our network score. What's yours? The network score is the average of every country's score

"Magicka 2 is a wolf in sheep robes. It may look casual, fun, but once you bite into it you'll soon realise it's a hardcore experience that requires both skill and strategy."

Out now on Steam, coming soon to PS4.

Magicka 2 shown off in a Completely Unscripted Co-Op Trailer

How we came to realise just how big of a deal Artefacts are in the sequel to the million selling wizard simulator.

"You can play your own game and enhance the part of Magicka you like the most."

Magicka 2 hits the stores May 26th

Paradox Interactive has announced the release date on Magicka 2 with a new trailer. 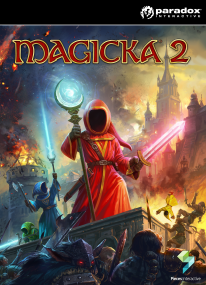