Quite out of nowhere, Mafia 2 has returned, all wrapped up in the trimmings of a Definitive Edition that includes a remastered version of the original plus all additional post-launch content. It follows 2016's Mafia III and precedes the rumoured return of the first game in this gangster-filled trilogy from 2K Czech and Hangar 13. However, a lot has happened since Mafia II first showed its face as a young third-person open-world action-adventure on the make, and we've played through the story campaign once again to see how it holds up after a decade in the can.

Mafia II's greatest strength is undoubtedly its narrative and the swagger with which it is delivered. Set during the 1940s and '50s, we're in Empire Bay, a fictitious reimagining of New York City filled with classic cars and smart-looking people going about their everyday business. Playing as a young Sicilian immigrant called Vito Scaletta, we're tasked with making a name for ourselves in the cut-throat world of organised crime, and that's easier than it sounds.

First impressions are great and, indeed, generally speaking, Mafia II holds up pretty well in 2020. Vito Scaletta, despite his questionable career path and criminal tendencies, is an engaging character and we were drawn into his exploits despite the fact that underneath it all, he's a killer willing to exploit his fellow man for a quick buck. We control Vito throughout this adventure, which is surprisingly varied and includes a number of entertaining set-pieces, including a quick sojourn to Italy during WW2 where Vito is sent to avoid jail time after getting caught during a botched heist.

The brief mission in Italy, while atypical in terms of location, sets the tone in terms of mission variety, and Mafia II does a great job of carrying us along with its narrative via a wealth of unique and interesting missions that have you committing all manner of crimes. Whether we're threatening dock workers or robbing government buildings, Vito rarely repeats himself during the campaign missions and that helped keep us enthralled throughout our 15-hour play-through. Most of the time the missions quickly devolve into gunfire, but there's so much story bookending these battles that it's impossible to not to get invested.

It's just a shame that these moments are framed by so much driving through Empire Bay, with key locations frequently positioned on opposite sides of the map. Early on, when the novelty of the setting has yet to wear off, tearing across town in a classic convertible is nothing short of pure pleasure, but after the umpteenth drive across the city, we were starting to feel the icy grip of boredom on our shoulder, pushing us forward like an irritating backseat driver. The occasionally draconian checkpoints don't help matters, and oftentimes we found ourselves repeating chunky sections of gameplay after making a simple mistake, for example, walking into enemy gunfire when it looked like the coast was clear.

The constant shuttling around the city ultimately only highlights the shortcomings of the open world, which by today's standards is empty and uninteresting, at least once the novelty of the setting wears off. There's very little to do in Empire Bay beyond the main campaign, and aside from a few pornographic collectibles and some wanted posters, we're given very little incentive to venture off the beaten track, and that's a damn shame because thanks to the engaging narrative, we were totally on board with the idea of completing some side-missions and battling with the police (who, by the way, might as well not be there as the 'wanted' system makes very little difference and often all you need to do is drive really fast and the cops will forget all about you).

At least you've got company thanks to a supporting cast of characters that are easy to invest in. You'll spend most of your time alongside Vito's best friend and brother-in-arms, Joe Barbaro. Apart from some repetitious comments during gun battles, Joe's presence made the story, and the banter between the characters is brought to life thanks to some clever scriptwriting and quality voice-acting. Joe's blunt-force personality drives much of the action, and he's an integral part of the experience, both in terms of gameplay and narrative.

Joe is also the star of one of the story expansions that come in the Definitive Edition. The Betrayal of Jimmy and Jimmy's Vendetta is a two-part story set aside from the main game and starring a new character, but Joe's Adventures is a short story campaign whereby our hot-headed wingman becomes the playable character. It fits snugly within the overall structure of the narrative in a way that we won't spoil here, but the expansion opens up new missions and locations and represents a considerable addition to the overall package, lengthening play-time considerably and giving us more time with the game's most interesting character.

The quality of the remaster itself is also pretty good. Thanks to atmospheric weather conditions and some thoughtful environmental design, Mafia II looks good considering its age. There are a few issues, however, with a lot of reused NPC models, some mild bugs (nothing game-breaking), and really strange traffic density that occasionally sees the city streets totally bereft of traffic for no obvious reason. The combat holds up pretty well though, with sticky cover, stealth kills, a range of classic weapons to choose from, and lots of melee combat. The character models for the main protagonists have been given a lot of love, too, which helped immerse us in the narrative, and we haven't mentioned the soundtrack yet, and we should have done so before now because it's bloody brilliant.

With a decent selection of DLC and a main story campaign full of intrigue and excitement, Mafia II: Definitive Edition is still worth a look in 2020, especially if you missed it the first time around. It looks good (mostly), plays great (mostly), and offers hours and hours of entertainment (with a bit of boring driving in between) to anyone even remotely interested in taking a trip back in time to post-war New York. It's not without its flaws, certainly, but we had a blast with Vito Scaletta and his Italian-American friends, and this is one time-capsule well worth digging up and dusting off despite its shortcomings.

Gamereactor UK
+
Still holds up pretty well, a decent remaster, lots of DLC, a good story well told, lovely soundtrack.
-
The open world feels a bit too empty at times, some frustrating checkpoints, recycled NPC assets, a few bugs.
is our network score. What's yours? The network score is the average of every country's score

"With plenty of DLC and a main story campaign full of intrigue and excitement, Mafia II is still worth a look in 2020."

The 2010 masterpiece Mafia II is back with a vengeance and we're delighted to stand in harm's way once again.

Mafia II rated for both consoles and Stadia 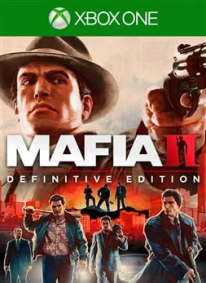