Hangar 13 hasn't had an easy ride over the last couple of years. Yes, Mafia III ended up selling millions of copies, but it didn't receive the critical acclaim that the studio might have hoped for and, more importantly, needed as a new studio trying to establish themselves alongside another Take-Two partner that also dabbles in open-world games about criminal empires - I think you know what I'm talking about. Afterwards, if Jason Schreier is to be believed, a bunch of prototypes were turned down, and the morale was pretty low. It didn't help either that Mafia II: Definitive Edition was a halfhearted affair with a Gamereactor network score of 6.7.

To put it bluntly, Hangar 13 needs a win, and a complete remake of the original Mafia doesn't seem like such a bad place to start. After all, the first chapter is widely recognised as the best of the bunch. In fact, it was widely praised for its groundbreaking design, interesting take on player freedom, and a heavy focus on realism that, at least for its time, was quite innovative. So bringing this game back to remind us all what the series is capable of and at the same time gather new creative energy with a success seems like a win-win, right?

Well, we might as well get it over with: no, this is not a win-win for Hangar 13, and I can't help but feel that the opportunity to deliver us a new, ambitious version of a beloved classic is kind of wasted. It doesn't mean that the game is bad though, far from it. But before we can move on and go more in-depth, let's sum up what is new here and what isn't.

The structure remains the same. Missions, their sequence, the basic mechanics, and the relationship between the open world and the linear mission structure is identical to how it was in the old game. In many ways, it is still Mafia, and the game cannot be compared with, for example, Final Fantasy VII: Remake, which has a much more ambitious scope in terms of the way it handles and transforms the original material that it's based on.

Of course, not everything is the same as before. This is a remake, not a remaster, and that distinction is crucial. First and foremost, the game is built from the ground up in Hangar 13's Illusion Engine, which also laid the foundations for Mafia III. The third game is not exactly remembered as a game with a solid technical base, and the engine doesn't exactly deliver breathtaking graphics, but the result is still a game that looks like something from 2020 and not just an antique that has been tidied up with a bit of spit and polish.

New and updated graphics, modern physics, and more realistic facial animations. So far, so good. And that's not all. All the voice work has been re-recorded and the new cast also lends their likeness to the motion capture-scenes. The soundtrack has also been remastered and sounds even more impressive than before. Most of the work, however, has been put into redesigning the city, Lost Heaven. It was a process involving a detailed study of large American cities from the '20s and '30s, and as a result, the districts are much more distinct and the architecture reflects these differences.

New voices, new scenes, a new city, and freshly polished graphics and physics - not bad, eh? After just a few moments with the game, you get the sense that the ambitions have been high enough to justify calling this game Mafia: Definitive Edition - because it is a proper "remake" and maybe the first step towards success.

So how does it play? Well, it is fine, and there are without a doubt moments where this remake manages the hard task of both capturing the spirit of the original and bringing the game forward into the modern era. It delivers exactly what a solid remake should do, but it is not without some serious hiccup along the way, and some of these flaws are... well, quite serious.

Firstly it is not exactly a happy marriage between Mafia III's graphics engine and the underlying structure of the original Mafia game. Just as in Mafia III, Tommy Angelo moves in a rather clunky fashion, and both moving from point A to B, sliding in and out of cover, and especially navigating tight areas, such as the deck of a steamboat, tight corridors, or the local pier, shows how imprecise the controls are. Even though not everyone cares for the weight and gravity of the movement in Red Dead Redemption 2, it is exactly what Mafia: Definitive Edition lacks. You are never in doubt that you are moving a digital avatar and not actually being Tommy, which is a shame.

Even more, and this is my most crucial and controversial gripe with the game, it feels like wasted potential that Hangar has spent so much time redesigning the city when there is so little to do in Lost Heaven. Yes, I'm aware that the original Mafia used the City as context, and it wasn't an open-world as much as a 3D canvas that made the linear story and mission structure come to life. Because like L.A. Noire and also Mafia II, Mafia is a rather linear tale, which isn't a problem in and of itself. But as a player, you constantly feel the urge to explore the city further, yet the game never provides you with a reason to do so. Maybe, just in this one area, it would have been a good idea to stray away from the original vision. Not necessarily to fill the game with boring filler, but maybe just to introduce a couple of "crime lords" to defeat, stores to rob, or maybe the ability to buy different clothes for your character. You have no money in the game, so it won't cost you anything to refuel your car or get pulled over by the police. The connection you have to the physical world you inhabit is so sparse, you end up lacking the motivation to follow a road other than the one the game guides you through. A remake should address stuff like this or else what's the point?

Luckily, Mafia: Definitive Edition is still solid entertainment if you forget the wasted potential of the open world and treat the game as a linear experience. Even though the shootings, car chases, and long drives between the various destinations are not exactly innovative, it all falls under the "if it ain't broke"-category and thanks to the overall linear design each mission feels relatively distinct. There are some limits such as there only being about 10 different weapons in the game, and after you have gotten familiar with the M1 Garand-like rifle, the Tommy gun and a shotgun, well there isn't really anything more. I would, however, recommend playing the game on the Classic Difficulty, which makes the police smarter and hides enemies on the mini-map. It gives the game some much-needed grounding in reality and at least keeps the police from going unemployed. You can tweak and adjust nearly all of the game's many parameters, from the level of police awareness to whether you want to use manual transmission.

Moving from mission to mission on the Classic Difficulty, the game is not a bad action-adventure, and while the story is no gem and never has been, it is still told in an effective fashion. What's more, thanks to the acceptable graphics, decent voice acting, and a truly sublime score, you slowly establish a connection to the people you encounter. On top of that, there is enough of a spectacle in the missions themselves that your entertainment is assured.

Besides, there is much to be said for the satisfying driving. Hangar 13 has managed to keep the weight and feel of the period's vehicles while at the same time providing enough manoeuvrability to keep on the tail of the car that you are chasing. Yet this still takes us back to my original complaint: why drive off the critical path and explore when there are no interesting destinations?

If you wanted more, if you wished for this to be Mafia 2.0 - a recreated and modernised version of all the aspects that made the original so iconic in a sleek new package with new content - you are going be disappointed. What you've got here is a relatively straight recreation of the original, constructed with new assets in a new engine, but not much more. I really wanted there to be something new, something more, but alas there isn't. That's too bad for Hangar 13, a studio that still desperately needs a win, but apparently must wait a while longer for its big break. This game isn't incompetent, actually it's pretty entertaining - I just wish there was more new stuff to tell you about.

REVIEW. Written by Magnus Groth-Andersen on the 24th of September 2020 at 16

Watch us return back to the streets of Lost Haven when we go live later today.

Check out our video review for Mafia: Definitive Edition

Hangar 13 has rebuilt this PS2 classic from the ground up - revitalising what was one of the console's finest open-world titles.

If you're intrigued to see how the remade open-world classic is shaping up, look no further. 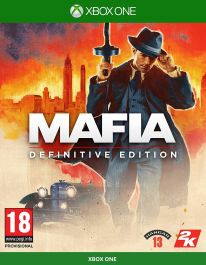